Anthony Sinisuka Ginting (born 20 October 1996) is an Indonesian badminton player and olympic medalist. He first rose to prominence when he won the bronze medal at the 2018 Asian Games. At the 2020 Olympic Games, he won bronze in the men's singles badminton event, his first Olympic medal in his career.

The badminton player who was born in Cimahi, of Karo descent, was introduced to badminton by his father when he was still in kindergarten. He is the fourth of five children. As a child, he joined PB SGS PLN in Bandung, West Java, a badminton club that fostered Indonesian badminton legend Taufik Hidayat. He started participating in tournaments around the age of 9 years old, two years after he was scouted.

In 2014, Ginting joining the national training camp early year, he began to show his worth with stepping up to cruise into Asian Junior Championships quarterfinals in Taipei, Chinese Taipei on February. In the quarterfinals, he was halted with a 13–21, 15–21 loss to Kanta Tsuneyama of Japan. Ginting then participated at the World Junior Championships in Alor Setar, Malaysia where he won a boys' singles bronze medal after bowed out in the semifinal to Shi Yuqi of China for 19–21, 15–21. He also competed at the 2014 Summer Youth Olympics in Nanjing, China and brought home a bronze medal after beating Aditya Joshi of India in the bronze-final match with a straight games 21–17, 21–16. In addition to competing in some international challenge tournaments, he also played in the BWF Grand Prix tournaments such as Chinese Taipei Open, Vietnam Open and Indonesian Masters.

Starting his journey as a rookie in the BWF Superseries event from the qualifying stage, Ginting moved into the quarterfinals after creating an upset with a rubber games 14–21, 22–20, 21–13 win over India's top shuttler and fourth seed Srikanth Kidambi in the second round of the Indonesia Open. His Indonesia Open campaign was eventually halted after losing to the eighth seed and 2012 BWF World Junior champion Kento Momota of Japan in quarterfinals with a rubber games 21–13, 16–21, 15–21.That was the beginning of his meeting with the Indonesia Open champion.At the Hong Kong Open, Ginting met again with Kento Momota in the second round and finally Ginting was able to get his revenge by defeating him 21-7, 21-15. Ginting was part of the Indonesian men's team that won a gold medal at the Southeast Asian Games in Singapore, after beating Thailand men's team 3–2 in the final.

Participating in the Chinese Taipei Open as an unheralded shuttler, Ginting reached the quarterfinals after defeating twelfth-seeded fellow Indonesian Dionysius Hayom Rumbaka with a straight sets 21–16, 21–14 in the third round of the tournament. In the first round, he surprisingly upset the eighth seed and 2009 BWF World Junior Champion Tian Houwei of China with a stunning 21–13, 21–14 victory. He then lost to the defending champion, former world No. 1 and two-time Olympic gold medalist Lin Dan of China with a straight games 7–21, 20–22 in the quarterfinals.

2017: First title in Korea opens and debut at the Sudirman Cup

2018: The first title in the country and the nickname of the giant killer

Entering 2018 Ginting started his BWF world tour brilliantly, he managed to become the champion in his homeland of the Indonesia Masters, he managed to beat Kazumasa Sakai in the Final with a score of 13-21, 12-21. Ginting and the Indonesian men's team also managed to win again in these Asia Team Championships after beating China 3-1 on aggregate in the final.

The 2018 Asian Games is a special event for Indonesia because it has a long time span since Indonesia hosted the 1962 Asian Games, which is 56 years and of course Indonesia also wants to excel in its favorite sport, badminton. Ginting started Badminton at the 2018 Asian Games – Men's team well with his friends in the men's team, he made it to the final against China, in the final game Ginting had to face Shi Yuqi the match was very exciting, the first game was won by Ginting but Shi Yuqi was able to overtake and win the second game, the struggle The determining game was fierce and a rubber game but very recently the ginting experienced cramps in his leg so he injured himself and had to lose with a score of 14-21, 23-21, 21-20, Retired. In the end, Indonesia had to recognize China's superiority by winning 3-1, one victory was won by Marcus Kevin. Ginting then started his match again in Badminton at the 2018 Asian Games – Men's singles the Individual category he had to face 2018 badminton world champion Kento Momota in the second round and 2016 Olympic champion Chen Long in the quarter-finals. Ginting managed to beat the two of them in straight games. In the semifinals he had to face Chou Tien-chen, the match was very exciting but Ginting had to admit Chou's superiority with a thin score of 16-21, 23-21, 21-17 Ginting had to be satisfied with the bronze medal.

2019–2020: Finalists in five tournaments and second title in Indonesia Masters 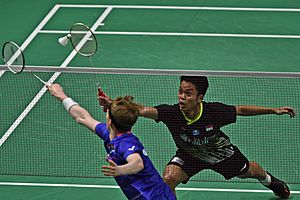 Ginting kicked-off the 2020 season in Malaysia Masters as eight seed. Unfortunately, he was defeated by unseeded player Huang Yuxiang in the first round in straight games. A week later, in home soil Indonesia Masters tournament, he finally clinched his first title since the 2018 China Open. Ginting defeated the defending champion Anders Antonsen of Denmark in the final. In February, he helped the Indonesian men's team defend the Asia Team Championships title. Ginting reached a career high as world number 3 in the world ranking on 18 February 2020. In March, the fourth seed Ginting, fell in the early round of Super 1000 tournament All England Open to Rasmus Gemke of Denmark. This is for the fifth time, he has defeated in the early round of the historical tournament All England Open, since his debut in 2016.

In 2021, Ginting competed at the 2020 Asian Leg tournament held in Thailand as a fifth seed. At the Yonex Thailand Open, he lost to Viktor Axelsen of Denmark in the semi-finals, while at the Toyota Thailand Open he lost to Lee Cheuk Yiu of Hong Kong in the second round. Ranked as number 9 in the season-end ranking, Ginting then secured a spot to compete at the World Tour Finals. Ginting won his first Olympic medal when he beat Kevin Cordón in the bronze medal match at the 2020 Summer Olympics, becoming the first Indonesian Olympic medalist in the men's singles badminton event since Sony Dwi Kuncoro in the 2004 Summer Olympics.

The BWF World Tour, which was announced on 19 March 2017 and implemented in 2018, is a series of elite badminton tournaments sanctioned by the Badminton World Federation (BWF). The BWF World Tours are divided into levels of World Tour Finals, Super 1000, Super 750, Super 500, Super 300 (part of the HSBC World Tour), and the BWF Tour Super 100.

The BWF Superseries, which was launched on 14 December 2006 and implemented in 2007, is a series of elite badminton tournaments, sanctioned by the Badminton World Federation (BWF). BWF Superseries levels are Superseries and Superseries Premier. A season of Superseries consists of twelve tournaments around the world that have been introduced since 2011. Successful players are invited to the Superseries Finals, which are held at the end of each year.

(W) Won; (F) finalist; (SF) semifinalist; (QF) quarterfinalist; (#R) rounds 4, 3, 2, 1; (RR) round-robin stage; (Q#) qualification round; (A) absent; (G) gold, (S) silver or (B) bronze medal; (NH) not held; (N/A) not applicable.
To avoid confusion and double counting, these charts are updated at the conclusion of a tournament or when the player's participation has ended.

All content from Kiddle encyclopedia articles (including the article images and facts) can be freely used under Attribution-ShareAlike license, unless stated otherwise. Cite this article:
Anthony Sinisuka Ginting Facts for Kids. Kiddle Encyclopedia.