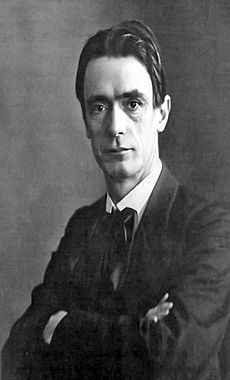 Anthroposophy is a philosophy founded by Rudolf Steiner. The philosophy teaches that through inner development a person can better know the spiritual world.

Anthropos is a Greek word that means "human being". Sophos means "wise". Steiner believed every human being had the wisdom to understand the mysteries of existence. He left the German Theosophical Society in 1912 trading divine wisdom for human wisdom.

Anthroposophy does not have a rigid set of beliefs. It is said to be a philosophy of freedom. Each person connects to the world through an individual path.

The path to wisdom is based on research. The research leads to knowledge. This is similar to teachings of Thomas Aquinas. Anthroposophy is different in that it pursues knowledge of science, the arts and spirituality all together.

All content from Kiddle encyclopedia articles (including the article images and facts) can be freely used under Attribution-ShareAlike license, unless stated otherwise. Cite this article:
Anthroposophy Facts for Kids. Kiddle Encyclopedia.