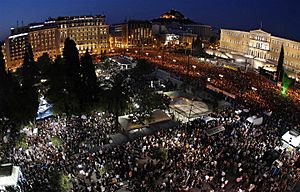 100,000 anti-austerity protesters in front of the Greek parliament in 2011

The anti-austerity movement refers to the mobilization of street protests and grassroots campaigns that has happened across many countries, especially in Europe, since the onset of the worldwide Great Recession.

Anti-austerity actions are different and ongoing. They continue as of the present day. The global Occupy movement has arguably been the most noticeable physical enactment of anti-austerity and populist sentiment.

All content from Kiddle encyclopedia articles (including the article images and facts) can be freely used under Attribution-ShareAlike license, unless stated otherwise. Cite this article:
Anti-austerity movement Facts for Kids. Kiddle Encyclopedia.