The Antigua Boat Sheds in Christchurch, New Zealand is an historic building on the banks of the Avon River. It is possibly the only 19th-century example of a commercial boat shed situated on a river in New Zealand. It has been used as a boat shed continuously since its completion in 1882. 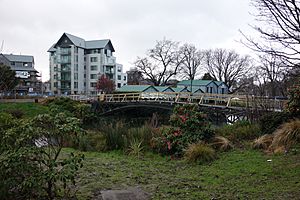 The sheds were built between 1882 and 1883 by two Lyttelton boat builders Albert Shaw and J.T. Tidd. They launched their first boat on 28 July 1882. Samuel Anstey took over the boat sheds in 1896 and introduced photographic services from within the boat sheds. On 14 May 1907 a fire destroyed half of the Antigua Boat Sheds along with around half the boats. The eastern end was replaced by a new two-storey section. The business was taken over by Maurice and Diane Phipps in 1978. In 1986, they sold the business to their daughter and son-in-law, Mike and Sally Jones, and later they sold them the building, too. As of 2017, the Jones' are still the proprietors of the business.

The building survived the 2010 and 2011 Christchurch earthquakes due to recent renovation and strengthening work.

The building was classified as a "Category II" historic place by Heritage New Zealand on 10 September 2004 with registration number 1825. It was upgraded to "Category I" on 19 February 2010.

All content from Kiddle encyclopedia articles (including the article images and facts) can be freely used under Attribution-ShareAlike license, unless stated otherwise. Cite this article:
Antigua Boat Sheds Facts for Kids. Kiddle Encyclopedia.