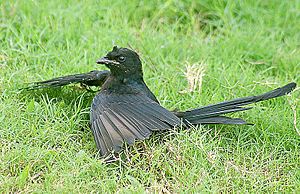 A Black Drongo in a typical anting posture

Anting is a behavior in which birds rub insects (usually ants) on their feathers. This removes liquids with chemicals such as formic acid. Instead of ants, birds can also use millipedes. Over 250 species of bird have been known to ant.

All content from Kiddle encyclopedia articles (including the article images and facts) can be freely used under Attribution-ShareAlike license, unless stated otherwise. Cite this article:
Anting Facts for Kids. Kiddle Encyclopedia.