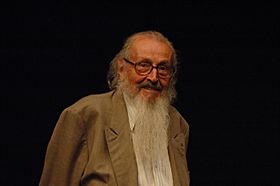 Duhamel was born in Valmondois in the Val-d'Oise département of France. Duhamel was the son of French writer Georges Duhamel and actress Blanche Albane. He studied music at the Sorbonne.

He wrote the score for his first movie in 1960. In 2002 he was awarded the Silver Bear at the Berlin Film Festival for his music for the Bertrand Tavernier directed movie, Laissez-passer.

All content from Kiddle encyclopedia articles (including the article images and facts) can be freely used under Attribution-ShareAlike license, unless stated otherwise. Cite this article:
Antoine Duhamel Facts for Kids. Kiddle Encyclopedia.