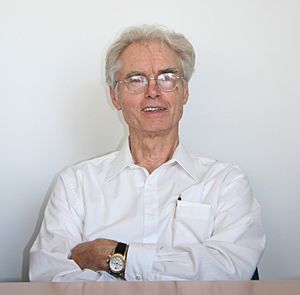 Mavretič was professor and research associate at the Center for Space Physics at Boston University. He was a corresponding member of Slovenian Academy of Sciences and Arts from June 2007 until his death. In 1985 he founded his consulting firm SIAT of Boston LLC.

Mavretič worked for the MIT Center for Space Research under contract for NASA from 1972 to 1979. He worked for the development of plasma spectrometers for Voyager 1 and Voyager 2 projects.

All content from Kiddle encyclopedia articles (including the article images and facts) can be freely used under Attribution-ShareAlike license, unless stated otherwise. Cite this article:
Anton Mavretič Facts for Kids. Kiddle Encyclopedia.