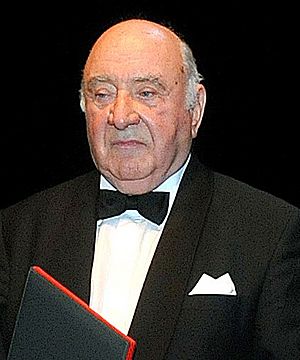 Anton Nanut (13 September 1932 – 13 January 2017) was a Slovenian conductor of classical music. From 1981 to 1999, he served as the chief conductor of the RTV Slovenia Symphony Orchestra. He was a professor of conducting at the Academy of Music in Ljubljana. He also had worked with over 200 orchestras and had made over 200 recordings with many labels. He also worked with Milenko Stefanovic. He was born in Kanal ob Soči.

All content from Kiddle encyclopedia articles (including the article images and facts) can be freely used under Attribution-ShareAlike license, unless stated otherwise. Cite this article:
Anton Nanut Facts for Kids. Kiddle Encyclopedia.