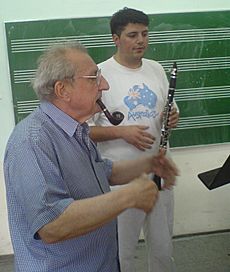 Professor Stefanović with a student (2007)

Milenko Stefanović (born February 19, 1930 in Belgrade, Serbia, then the Kingdom of Yugoslavia) is the most famous Serbian classical and jazz clarinet player – soloist, former Principal Clarinetist of the Belgrade Philharmonic Orchestra and Professor at the Josip Slavenski School of Music, University of Pristina and University of the Arts in Belgrade.

Stefanovic began his music study at the age of five. He graduated and completed his postgraduate studies from the Belgrade Conservatory. His major teacher was Professor Bruno Brun, the founder of modern Serbian school of clarinet playing. Additionally, he studied chamber music and orchestral playing in Salzburg, Austria, in the class of Igor Markevich, Erich Leinsdorf and Fernand Oubradous.

Stefanovic was a top-prize winner or finalist in the major Yugoslavian and international competitions, including the competitions in Sarajevo (1952), Skopje (1954), Ljubljana (1956), Moscow (1957), Munich (1957), Geneva (1957) and Prague (1959). Additionally, he was honored with the Award of the Yugoslavian Radio-Television (Ohrid, 1972), awards of the City of Belgrade for the best concert in the previous concert season (1976, 1981, 1986), as well as with 7th July Award (1962), the state’s highest award for the arts. In 2007, upon recommendation of the Expert Committee of the Ministry of Culture, he was awarded Special Acknowledgement for the Highest Contribution to the National Culture of the Republic of Serbia. In 2010 the Association of Musical Artists of Serbia awarded him with The Lifetime Achievement Award.

He was one of the few artists honored to perform Copland’s Clarinet Concerto under the baton of Maestro Aaron Copland (1961).

He was a long-time principal clarinetist of the Belgrade Philharmonic Orchestra (1954-1976).

Stefanovic also played jazz – as a soloist and member of the Belgrade Jazz Trio and Markicevic Quintet.

Stefanovic was the chair of the committee in numerous Yugoslavian and international competitions.

He taught at the Josip Slavenski School of Music, University of Pristina and University of the Arts in Belgrade. His former students hold teaching positions in music schools and universities and play in orchestras in Europe, Asia, Australia and North America. Stefanovic wrote several textbooks for the clarinet students.

He served as the Vice-Chancellor and member of the Board of Trustees of the University of the Arts in Belgrade.

Stefanovic is an honorary member and former president of the Association of Musical Artists of Serbia.

All content from Kiddle encyclopedia articles (including the article images and facts) can be freely used under Attribution-ShareAlike license, unless stated otherwise. Cite this article:
Milenko Stefanovic Facts for Kids. Kiddle Encyclopedia.