The Apache Point Observatory (APO; obs. code: 705) is an astronomical observatory located in the Sacramento Mountains in Sunspot, New Mexico, United States, approximately 18 miles (29 km) south of Cloudcroft. The observatory is operated by New Mexico State University (NMSU) and owned by the Astrophysical Research Consortium (ARC). Access to the telescopes and buildings is private and restricted.

Five additional organizations have joined over time: the Institute for Advanced Study, Johns Hopkins University, University of Colorado, University of Virginia, and Georgia State University. Funding for the 3.5 m and 0.5 m telescopes comes from consortium, but funds for the 2.5 m telescope come from a much wider array of sources. The 1.0 m telescope is supported exclusively by NMSU. 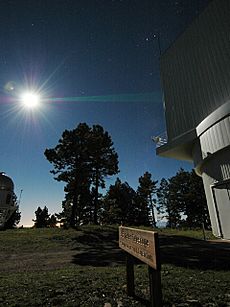 The ARC 3.5 m (140 in) telescope is a Ritchey-Chretien reflector on an alt-azimuth mount with instruments attached at several focal points. Construction of the building began in 1985, but full operations of the telescope were delayed until November 1994 due to problems with fabricating the primary mirror. From 1991 until early 1993 the telescope was fitted with a 1.8 m mirror now located at Rothney Astrophysical Observatory under a cost-sharing agreement.

There are a variety of optical and near-infrared instruments available for the 3.5 m telescope, including:

The 3.5 m telescope is also used by the Apache Point Observatory Lunar Laser-ranging Operation (APOLLO) lunar-ranging project. The APOLLO laser has been operational since October 2005, and routinely accomplishes millimeter-level range accuracy between the Earth and the Moon.

Observations using the 3.5 m telescope can be carried out remotely by observers using TUI, the Telescope User Interface, via the internet. 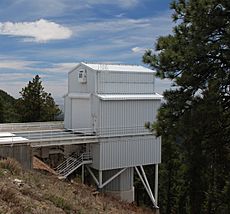 Enclosure of the SDSS

The SDSS 2.5 m (98 in) telescope is used for the Sloan Digital Sky Survey, and began operating in 2000. It is a Ritchey-Chretien reflector on an alt-azimuth mount housed under a roll-off enclosure. It was designed with an unusually large 3° field of view to better support its primary task of surveying the entire sky.

The ARC Small Aperture Telescope (ARCSAT) was previously called the Photometric Telescope (PT) when it was part of the SDSS project. It is a 0.5 m (20 in) reflecting telescope on an equatorial mount, with a single CCD camera cooled by a CryoTiger unit. It was built in 1991, moved from its previous location in 1998, and used by the SDSS until 2005. It is currently used for small research projects.

The Minor Planet Center credits the discovery of the following minor planets directly to the Apache Point Observatory:

All content from Kiddle encyclopedia articles (including the article images and facts) can be freely used under Attribution-ShareAlike license, unless stated otherwise. Cite this article:
Apache Point Observatory Facts for Kids. Kiddle Encyclopedia.