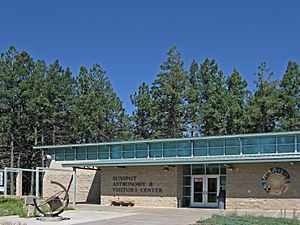 Sunspot is an unincorporated community in the Sacramento Mountains in Otero County, New Mexico, United States. It is located within the Lincoln National Forest, 18 miles south of Cloudcroft. Its elevation is 9200 feet.

It is named after the nearby National Solar Observatory on Sacramento Peak, in a vote that was allegedly rigged by the observatory's director John Evans. The sole road that drives into Sunspot is New Mexico State Road 6563, named for the brightest wavelength of hydrogen emission, H-alpha.

Most of the grounds are available to the public, but the residential area is off limits to the general public.

All content from Kiddle encyclopedia articles (including the article images and facts) can be freely used under Attribution-ShareAlike license, unless stated otherwise. Cite this article:
Sunspot, New Mexico Facts for Kids. Kiddle Encyclopedia.