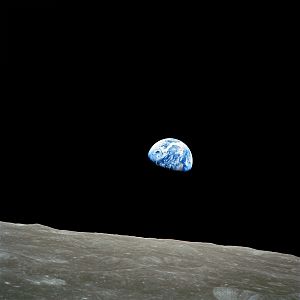 A color picture of the Earth and Moon on December 24, 1968. People watching the broadcast saw a black and white picture.

On December 24, 1968, the crew of Apollo 8 read from the Book of Genesis on a television broadcast of their mission as they orbited the moon. Bill Anders, Jim Lovell, and Frank Borman read verses 1 through 10, using the Authorized King James Version text.

Bill Anders
"We are now approaching lunar sunrise, and for all the people back on Earth, the crew of Apollo 8 has a message that we would like to send to you.
'In the beginning God created the heaven and the earth.
And the earth was without form, and void; and darkness was upon the face of the deep.
And the Spirit of God moved upon the face of the waters. And God said, Let there be light: and there was light.
And God saw the light, that it was good: and God divided the light from the darkness.'"

Frank Borman
"'And God said, Let the waters under the heaven be gathered together unto one place, and let the dry land appear: and it was so.
And God called the dry land Earth; and the gathering together of the waters called he Seas: and God saw that it was good.'
And from the crew of Apollo 8, we close with good night, good luck, a Merry Christmas – and God bless all of you, all of you on the good Earth."

All content from Kiddle encyclopedia articles (including the article images and facts) can be freely used under Attribution-ShareAlike license, unless stated otherwise. Cite this article:
Apollo 8 Genesis reading Facts for Kids. Kiddle Encyclopedia.