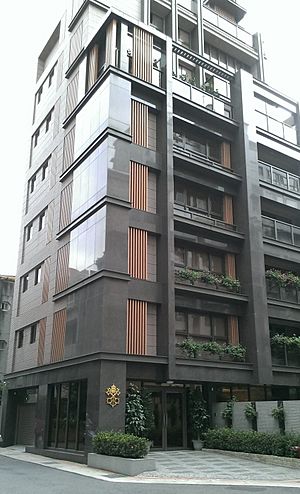 Apostolic Nunciature in the Republic of China (Taiwan)

The head of nunciature is called a Nuncio. The nuncio is the equivalent of an Ambassador, or a High Commissioner in Commonwealth countries.

A pro-Nuncio was the name used for a Nuncio in countries which did not make a Nuncio Dean of the Diplomatic Corps automatically. The Vatican stopped using the title in 1991.

An Apostolic Delegate represented the Holy See to the church, but not the government, in another country.

All content from Kiddle encyclopedia articles (including the article images and facts) can be freely used under Attribution-ShareAlike license, unless stated otherwise. Cite this article:
Apostolic Nunciature Facts for Kids. Kiddle Encyclopedia.