Apple Beer is a non-alcoholic American brand of the German drink fassbrause, produced by The Apple Beer Corporation in Salt Lake City. Apple Beer is primarily distributed to the Western and Mountain regions of the United States and in the Caribbean.

Apple Beer was first produced in the 1960s from the fassbrause formula of Scholvien & Co. (now WILD Flavors). Although originally only available in cans, Apple Beer is now also available in glass bottles and in soda fountains. 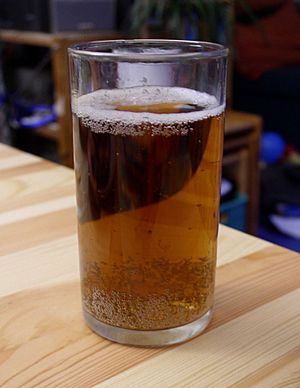 A glass of apple beer

All content from Kiddle encyclopedia articles (including the article images and facts) can be freely used under Attribution-ShareAlike license, unless stated otherwise. Cite this article:
Apple Beer Facts for Kids. Kiddle Encyclopedia.