Alcohol by volume facts for kids 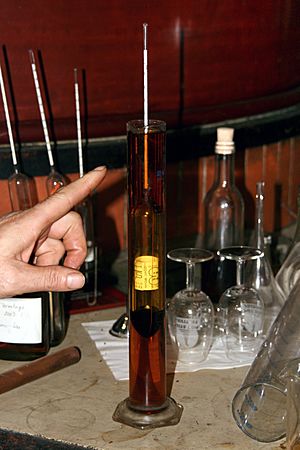 Alcohol by volume (often shortened to ABV) tells how much ethanol there is in an alcoholic drink. The quantity is measured at a temperature of 20 °C (68 °F). Common levels of alcohol are 3-5 percent for cider, 4-7 percent for beer, and 12-14 percent for wine. Distilled alcoholic drinks ( called spirits) contain more than twenty percent ethanol.

A directive of the European Union of 1976 says that the alcohol content of alcoholic drinks must be measured using the ABV measurement described above.

Joseph Louis Gay-Lussac (1777-1850) and Johann Georg Tralles (1763-1822) developed other means of measuring alcohol content. These units are usually measured in degrees, noted °GL, or °GT. The scale Gay-Lussac developed is almost equal to the ABV scale described above. There may be slight different, because Gay-Lussac measured the alcohol content at 15° centigrade, and not 20°.

All content from Kiddle encyclopedia articles (including the article images and facts) can be freely used under Attribution-ShareAlike license, unless stated otherwise. Cite this article:
Alcohol by volume Facts for Kids. Kiddle Encyclopedia.