Aquaman: Power Wave is an upcoming steel launch shuttle roller coaster at Six Flags Over Texas in Arlington, Texas. The roller coaster is themed to the DC Comics character, Aquaman.

Due to the growing concerns of the COVID-19 pandemic, Six Flags announced a suspension of operations across the company on March 13, 2020. This included all operations at Six Flags Over Texas, including the prep work for the new coaster. The park resumed operations on June 19, 2020, with Aquaman: Power Wave still fenced in for construction. Earlier in April of 2020, Six Flags announced measures for the company to survive the coronavirus pandemic, including deferring capital projects across the company that was slated for the 2020 season. In December 2020, Six Flags Over Texas responded to a user on Twitter questioning the status of Aquaman: Power Wave. The park stated that the coaster will now open in 2022. 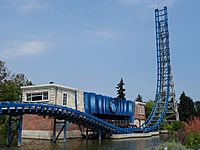 Aquaman: Power Wave will be similar to the Pulsar roller coaster.

Once riders are loaded, the train then accelerates backwards over a small hill before travelling through a straight section of track. This straight section of track forms the ride's splashdown pool, which is empty at this point in the ride. The car then travels part of the way up a vertical spike of track before travelling forwards over the hill. The car then launches forward into a second vertical spike and comes back down before entering a third backwards launch. While the car is on the vertical spike at the back end of the ride's layout, the splashdown pool fills with water in approximately six seconds. The car then travels down the spike and enters the splashdown pool, which is now filled with water. This serves to slow the car down before the end of the ride to unload riders.

All content from Kiddle encyclopedia articles (including the article images and facts) can be freely used under Attribution-ShareAlike license, unless stated otherwise. Cite this article:
Aquaman: Power Wave Facts for Kids. Kiddle Encyclopedia.