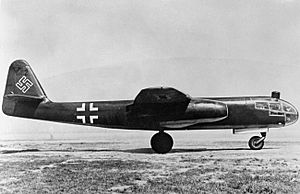 The Arado Ar 234 was the first twin-turbojet bomber in the world. It was designed and built by the Arado company in Nazi Germany. The Ar 234 was used by the German Air Force (the Luftwaffe) near the end of World War II. It was flown for the first time in 1943.

All content from Kiddle encyclopedia articles (including the article images and facts) can be freely used under Attribution-ShareAlike license, unless stated otherwise. Cite this article:
Arado Ar 234 Facts for Kids. Kiddle Encyclopedia.