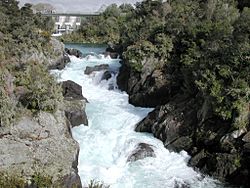 The Aratiatia Rapids are an area of New Zealand river rapids downstream from the dam for the Aratiatia Power Station on the Waikato River. The rapids are extremely dangerous.

Before construction of the dam and hydro station, the Aratiatia Rapids were a prominent feature on the Waikato River, and became a scenic reserve in 1906. The dam construction meant that no water flowed over the rapids. However, several times a day, the Aratiatia dam gates are opened, which restores the rapids to their normal operation.

There are three lookout points to watch the Dam release into the rapids, watching the release is a popular tourist attraction.

All content from Kiddle encyclopedia articles (including the article images and facts) can be freely used under Attribution-ShareAlike license, unless stated otherwise. Cite this article:
Aratiatia Rapids Facts for Kids. Kiddle Encyclopedia.