Aratiatia is a largely run-of-the-river station, as it generates electricity from water from the Lake Taupo control gates and to the Ohakuri Power Station. It does, however, have a 55-hectare (140-acre) lake behind the station for temporary storage.

The New Zealand Ministry for Culture and Heritage gives a translation of "pegged ladder" for Aratiatia. 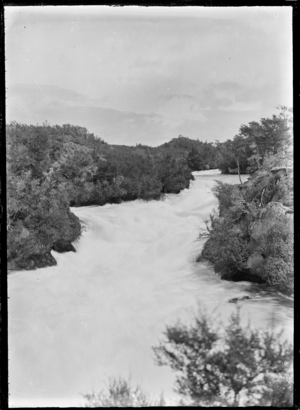 View of Aratiatia Rapids in 1928

Before construction of the dam and hydro station, the Aratiatia Rapids were a prominent feature on the Waikato River; a scenic reserve from 1906. The dam construction meant that no water flowed over the rapids. However, several times a day, the Aratiatia dam gates of the Waikato River are opened, which restores the rapids to their normal operation. There are several public lookout points on the high rock bluffs that dominate this turbulent stretch of Aratiatia Rapids.

All content from Kiddle encyclopedia articles (including the article images and facts) can be freely used under Attribution-ShareAlike license, unless stated otherwise. Cite this article:
Aratiatia Power Station Facts for Kids. Kiddle Encyclopedia.