The Arcada Theatre Building is a theater in St. Charles, Illinois located on Main Street (which becomes North Avenue (Chicago) further eastward). The theatre was opened on Labor Day, September 6, 1926, engaging projection of silent movies and the staging of live vaudeville acts. Except for brief periods of renovation, it has remained continuously open. It is listed on the National Register of Historic Places. 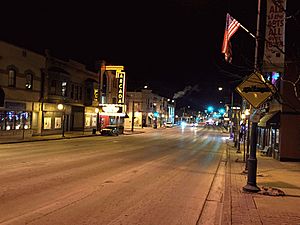 The Arcada Theatre was built in 1926 by local millionaire and Chicago Tribune cartoonist Lester J. Norris. The new theatre was a $500,000 example of the Norris family's confidence in the future of St. Charles. With only 5,000 residents in the town, more than 1,009 seats were installed.

Upon the Arcada's grand opening, the public came in such large numbers that hundreds were unable to gain entrance. Chicagoans arrived by a special railway car to see the featured film "The Last Frontier" and the Vaudeville acts of Fibber McGee and Molly. Patrons also heard a recital on the famous $25,000 Marr and Colton silver and red organ, which was adorned with carved flamingos.

In May 2005, Ron Onesti, president of The Onesti Entertainment Corporation (OEC), assumed ownership of its operations only. He does not own the Arcada Theatre building. Making use of its standing as a producer of entertainment shows in the United States, the OEC brought marquee performances typical of major city downtowns to the far western suburbs of Chicago.

All content from Kiddle encyclopedia articles (including the article images and facts) can be freely used under Attribution-ShareAlike license, unless stated otherwise. Cite this article:
Arcada Theater Building Facts for Kids. Kiddle Encyclopedia.