Kids Encyclopedia Facts
Not to be confused with Arcadia, Shelby County, Texas. 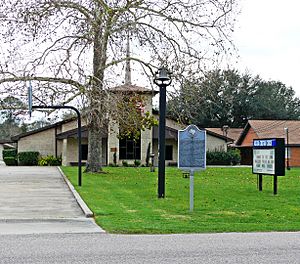 Arcadia was an unincorporated area in Galveston County, Texas, United States, which is now a neighborhood of the city of Santa Fe. It sits at an elevation of 30 feet (9 m).

Arcadia was established around 1889 near Hall's Bayou on the Gulf, Colorado and Santa Fe Railway. It was named after Arcadia, Louisiana. Henry Runge plated the town in 1890 as Hall's Station on Stephen F. Austin's fourth land grant. The Coaque people were native to the area, which was later explored by Álvar Núñez Cabeza de Vaca. The town became a part of Santa Fe, Texas, in the 1980s.

All content from Kiddle encyclopedia articles (including the article images and facts) can be freely used under Attribution-ShareAlike license, unless stated otherwise. Cite this article:
Arcadia, Santa Fe, Texas Facts for Kids. Kiddle Encyclopedia.