Arden is a historic estate outside Harriman, New York, that was owned by railroad magnate Edward Henry Harriman and his wife, Mary Averell Harriman. By the early 1900s, the family owned 40,000 acres (63 sq mi; 160 km2) in the area, half of it comprising the Arden Estate. The main house is at the top of a mountain east of the village, reachable by Arden House Road from NY 17. Since 2011, it has been owned by the nonprofit Research Center on Natural Conservation, which operates Arden House as a conference center with 97 guest rooms. 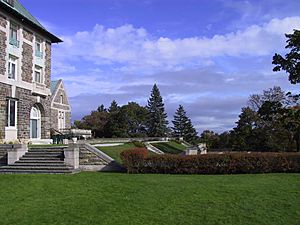 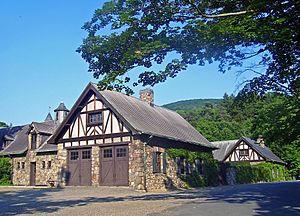 On September 17, 1886, Harriman bought at auction the 7,863-acre (31.82 km2) Peter Parrott family estate for $52,500, which was named Arden by the Parrott family after Mrs. Parrott's maiden name. Over the next several years, he purchased an additional 20,000 acres (81 km2), almost forty different parcels of land, and built forty miles (64 km) of bridle paths. Harriman hired Carrère and Hastings to design a home, which was begun in 1905. Harriman had planned it for many years, but lived in it for only a few months before his death in 1909.

The house features a dramatic music room, modeled after a medieval great hall. Around the central courtyard is a brick corridor lined with murals by Barry Faulkner. Harriman commissioned a number of American artists to decorate the house. James Earle Fraser did a bas-relief portrait of Harriman over one of the fireplaces, as well as a fountain in the interior court; Malvina Hoffman did a bust of Mrs. Harriman; and Charles Cary Rumsey did a fountain of the Three Graces, a marble fireplace surround that featured a caricature of architect Thomas Hastings, and corbel carvings of bighorn sheep in the music room. He also managed to marry Harriman's daughter, Mary, in 1910, much to the surprise of society. Lining the staircase were Herter Brothers tapestries depicting the creation of the house. On the second floor was an "Indian Corridor", featuring photographs of Native Americans taken by Edward S. Curtis during the Harriman Alaska Expedition of 1899.

Harriman's widow gave the house to her son W. Averell Harriman upon his wedding in 1915, although she continued to live in the west wing of the building until her death in 1932. After the U.S. entered World War II, the family offered the house to the U.S. Navy, which turned it into the first of the Navy's convalescent hospitals, modeled on those that England and Russia had already successfully created. In 1950, Averell Harriman and his brother Roland deeded the property to Columbia University, as "home of The American Assembly", a public policy institution founded by Dwight D. Eisenhower the same year. It became primarily used as a center for executive management programs. The house was identified as America's first conference center, and became a National Historic Landmark in 1966 but is not open to the public.

It was from this estate that Harriman's widow donated 10,000 acres (40 km2) and one million dollars to New York State to start Harriman State Park in 1910.

In 2007, the Open Space Institute bought Arden House and its surrounding 450 acres (1.8 km2). The house commands extensive views of the Ramapo River Valley. The property brings the total of preserved lands that were once owned by the Harriman family in New York State to nearly 70,000 acres (280 km2), including Bear Mountain, Harriman and Sterling Forest State Parks.

In 2010, the Open Space Institute put the house up for sale. The house was purchased in 2011 by a Chinese-backed nonprofit, the Research Center on Natural Conservation, Inc. In 2015, the same group bought the bankrupt New York Military Academy.

All content from Kiddle encyclopedia articles (including the article images and facts) can be freely used under Attribution-ShareAlike license, unless stated otherwise. Cite this article:
Arden (estate) Facts for Kids. Kiddle Encyclopedia.