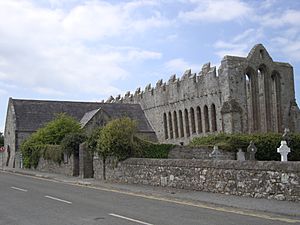 The Ardfert Cathedral (Irish: Ardeaglais Ard Fhearta) is a ruined cathedral in Ardfert, County Kerry, Ireland. Dedicated to Saint Brendan, it was the seat of the Diocese of Ardfert from 1117. It is now a heritage tourism site.

The cathedral has a Romanesque west doorway with outward pointing chevron decoration in the Anglo-Norman style. It is flanked by blind arcading with lozenge-stonework similar to that found in parts of south-west France. It also has a 13th-century east window and a row of nine lancets in the south wall. Two effigies of ecclesiastical figures of the late 13th- or early 14th-century period are mounted on either side of the east window. The battlements were added in the 15th century. The pre-12th century block of masonry is clearly visible in the north wall. One of the two smaller churches is a fine example of late Romanesque and the other is a plain 15th century structure with a carving of a wyvern on one of the windows. In the north-east corner is a double rectangular niche containing a grotesque head with lips pulled back to reveal large teeth. This may be a variant of the 'mouth-puller' motif often found in Spain and western France.

To the north-west of the cathedral itself is Temple-na-hoe, a late Romanesque church, whose chancel has now disappeared. It has decorated three quarter columns instead of antae at each cornerstone, with heads and bird motifs on the capitals. A cornice decorated with spiral bosses supports the roof. The west doorway is plain, but the south window has floral ornament and the chancel arch has chevron ornament.

Further to the north-west is a 15th-century church, Temple-na-Griffin, after the carvings of wyverns inside the windows of the north wall. 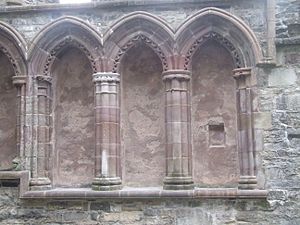 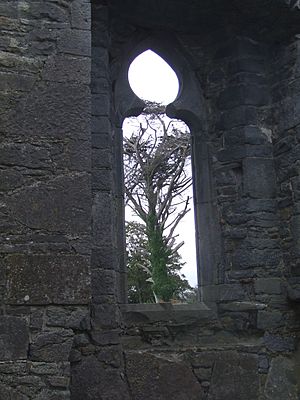 Ardfert was the site of a Celtic Christian monastery reputedly founded in the 6th century by Saint Brendan. Although the Synod of Ráth Breasail in 1111 had put the cathedral for Ciarraige at Ratass Church near Tralee, it was moved to Ardfert by 1117. The Diocese later renamed "Ardfert and Aghadoe", although it is unclear whether Aghadoe "Cathedral" ever operated as a separate diocese.

The site has three medieval church ruins, the main and earliest building being from the 12th century. Within the adjoining graveyard there are two other churches, Temple Na Hoe dating from the 12th century and Temple Na Griffin dating from the 15th century. The main church has an ogham stone and a number of early Christian and medieval grave slabs. In the 15th century, a small transept was added and battlements were constructed. During the Reformation in Ireland, the established Church of Ireland became Protestant. The cathedral roof was destroyed during the Irish Rebellion of 1641, but the south transept was re-roofed and extended later in the 17th century. From 1663 the diocese was united with the Diocese of Limerick and the former cathedral became a parish church. In 1871, when a new Church of Ireland church was opened, the cathedral's roof was again removed. After the 1871 disestablishment of the Church of Ireland, its disused historic sites, such as Ardfert Cathedral, were transferred to the Board of Public Works, now the Office of Public Works. Part of the transept has been restored, and houses the entrance and a gift shop.

All content from Kiddle encyclopedia articles (including the article images and facts) can be freely used under Attribution-ShareAlike license, unless stated otherwise. Cite this article:
Ardfert Cathedral Facts for Kids. Kiddle Encyclopedia.