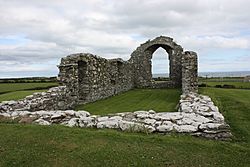 Ardtole Church (Ulster Scots: Ardtole Kirk) is a 15th-century ruined church standing on a hilltop overlooking the Irish Sea and the Isle of Man, 0.75 miles (1.2 km) north-east of the town of Ardglass in County Down, Northern Ireland, at grid ref: J564382.

It was formerly the Parish Church of Ardglass and is dedicated to St Nicholas, the patron saint of sailors. The structure is of a characteristic Anglo-Irish parish church of the Middle Ages. The long narrow church seems largely of 15th century date, with a huge east window and opposed north and south doors, one with a draw-bar hole. In 1791 a cross-decorated slab of the Early Christian period was found, showing that perhaps the site has a longer tradition than the surviving remains would suggest. A souterrain was also found south of the church. The early cross slab, now built into the Roman Catholic church at Chapeltown, and the souterrain, suggest Early Christian activity on the hilltop.

The Church sat halfway between the Anglo-Norman settlers and traders of Ardglass and the native Irish of the surrounding area, but was used by both sets of people until the 15th or 16th century. According to tradition some people from Ardglass found the chieftain of the MacCartans in a drunken sleep and fastened his hair to some briars. He avenged this affront with a massacre of the townsmen gathered together for mass in Ardtole Church. This disaster led to the abandonment of the building as a place of worship for Ardglass, probably in the 16th century.

All content from Kiddle encyclopedia articles (including the article images and facts) can be freely used under Attribution-ShareAlike license, unless stated otherwise. Cite this article:
Ardtole Church Facts for Kids. Kiddle Encyclopedia.