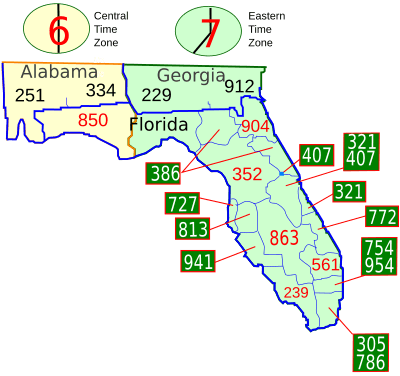 The creation of 561 was intended as a long-term solution. However, within only five years, 561 was close to exhaustion once again due to rapid growth in the Palm Beaches/Treasure Coast region and the proliferation of cell phones. The supply of numbers was further limited because all of South Florida from the Treasure Coast to the Florida Keys is a single LATA, meaning numbers in Miami's 305/786 and Fort Lauderdale's 954/754 were not available for use. To solve the problem, in 2002 the northern part of 561 (the Treasure Coast) became area code 772.

Area code 561 has telephone numbers assigned for the central office code 988. 988 has been designated nationwide as a dialing code for the National Suicide Prevention Lifeline, which creates a conflict for exchanges that permit seven-digit dialing. This area code is therefore scheduled to transition to ten-digit dialing, mandatory after October 24, 2021.

All content from Kiddle encyclopedia articles (including the article images and facts) can be freely used under Attribution-ShareAlike license, unless stated otherwise. Cite this article:
Area code 561 Facts for Kids. Kiddle Encyclopedia.