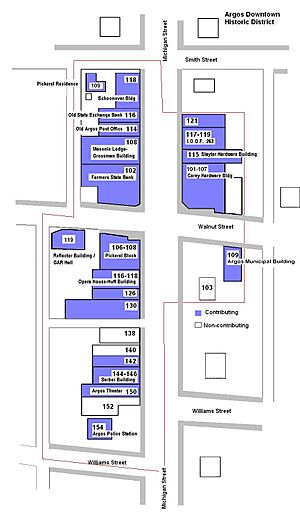 It was listed on the National Register of Historic Places in 2001.

The town of Argos lies in Walnut Township, Marshall County, Indiana, along the Michigan Road where it intersects with State Road 10, formerly known as the Wabash Road and now known within the town limits as Walnut Street. The district comprises three blocks lining Michigan Street. Historically, these blocks were primarily commercial in nature with development radiating from the intersection of Michigan and Walnut Streets (primarily eastward on Walnut to the railroad and the plat of Fremont). The Michigan Road was main road between Indianapolis and Lake Michigan. The district's remains the commercial center of the surrounding community. Examples of 19th and early 20th century architecture characterize district. The district is an example the small midwestern downtowns from 1867 through 1942.

The architecture of the district is varied in styles, with a near full range of those styles typical to Midwestern towns during the period of significance from 1867 -1942. This concentration of structures in a commercial section of a town plat reflects the character of typical Michigan Road towns. There are four notable buildings of different styles that best exemplify the range of architecture during the period of significance. The earliest is the Schoonover Building, a 19th-century building. It is a rare example of early frame ‘commercial’ building. These usually are replaced during the business’ life with a brick buildings. A second example is the old Argos Opera House-Huff Building which is ‘railroad town’’ Italianate architecture of the late 1800s. The Masonic Lodge-Grossman Building is Romanesque Revival style. The Farmers State Bank is in the Neo-Classical style. 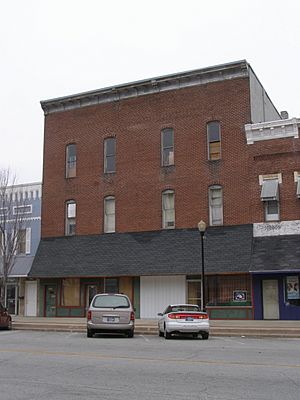 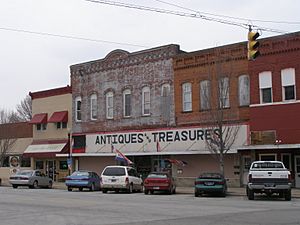 In each bay of the bank, are window openings using a recessed limestone panel and a raised rectangular frame. The northern section (1960 addition) is only one story, but the roof line has been maintained with a limestone screen. Where window openings exist in the original part, there is patterned stone block. The window and entrances have been modernized. A cornice marks the roof line on both street fronts. The cornice is topped with a limestone parapet.

All content from Kiddle encyclopedia articles (including the article images and facts) can be freely used under Attribution-ShareAlike license, unless stated otherwise. Cite this article:
Argos Downtown Historic District Facts for Kids. Kiddle Encyclopedia.