Argyle diamond mine facts for kids 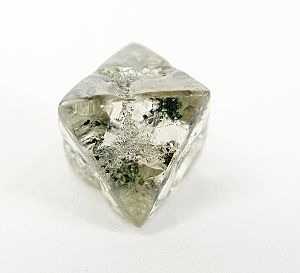 Uncut diamond crystal from the Argyle mine, 4.27 carats

The Argyle Diamond Mine is a diamond mine located in the East Kimberley region in the remote north of Western Australia. Argyle was at times the largest diamond producer in the world by volume (14 million carats in 2018), although the proportion of gem-quality diamonds was low. It is the only known significant source of pink and red diamonds (producing over 90% of the world's supply), and additionally provided a large proportion of other naturally coloured diamonds, including champagne, cognac and rare blue diamonds.

Mining operations ceased in November 2020, with mine operator Rio Tinto planning to decommission the mine and rehabilitate the site at least through 2025.

The Argyle diamond mine is also notable for being the first successful commercial diamond mine exploiting a volcanic pipe of lamproite, rather than the more usual kimberlite pipe; much earlier attempts to mine diamonds from a lamproite pipe in Arkansas, United States, were commercially unsuccessful. The Argyle mine is owned by the Rio Tinto Group, a diversified mining company which also owns the Diavik Diamond Mine in Canada and the Murowa diamond mine in Zimbabwe.

The Argyle diamond mine is located in the Kimberley region in the far northeast of the Australian state of Western Australia. It is located to the south-west of Lake Argyle in the Matsu Ranges, about 550 km (340 mi) south-west of Darwin. Because it is 185 km (115 mi) by road from the nearest settlement (Kununurra), a complete residential camp has been constructed on site. Most of the 520 workers commute from Perth, over 2,000 km (1,200 mi) away, for alternating two-week shifts at the mine. The mine has encouraged local employment and has a large number of indigenous local people working within the mine.

Small quantities of alluvially deposited diamonds have been known in Australia since the late 19th century, first found by prospectors searching for gold. However, no source volcanic pipe deposit was apparent. Following the discovery of several alluvial diamonds in the West Kimberley region along the Lennard River (Ellendale area) in 1969 a systematic search of Western Australia for the source of these diamonds was began by a consortium of mining companies, collectively known as the Kalumburu Joint Venture. Tanganyika Holdings part of the Kalumburu Joint Venture (later to become the Ashton Joint Venture) had employed Maureen Muggeridge. In 1979, Muggeridge discovered diamond samples in the floodplain of a small creek that flowed in Lake Argyle. She soon traced the source of the diamonds to the headwaters of Smoke Creek. On 2 October 1979, the Argyle pipe was discovered.

Over the following three years, the deposit was assessed for economic viability, and in 1983 the decision was made to commence mining operations. Alluvial mining operations commenced immediately, while the open-pit mine was constructed over a period of 18 months at a cost of A$450 million. The mine was commissioned in December 1985.

The mine is the first successful commercial diamond mine (except alluvial mining operations) not located on a kimberlite pipe. The pipe is named "AK-1", although it is commonly simply called the "Argyle pipe".

The volcanic pipe is a diatreme, composed of olivine lamproite, present as tuff and lava. Peripheral volcanic facies suggest the lamproite eruption formed a maar. At the margins of the volcanic pipe the lamproite is mixed with a volcanic breccia containing shattered wall rock fragments mixed and milled by the eruption. Minerals in the marginal facies include zeolite minerals, micas, kaolinite and clays, typical of post-eruption hydrothermal circulation.

Diamonds are found within the intact core of the volcanic pipe, as well as within some of the marginal breccia facies and maar facies. However, some diamonds are considered to have been resorbed during the post-eruption cooling of the pipe and converted to graphite.

The diatreme pipe formed by explosive eruption of the lamproite magma through a zone of weakness in the continental crust.

The diamonds found at the Argyle pipe have been dated to about 1.58 billion years of age, while the volcano which created the pipe is aged between 1.1 and 1.2 billion years old. This represents a relatively short period during which diamond formation could have taken place (around 400 million years), which may explain the small average size and unusual physical characteristics of Argyle diamonds. Diamonds found in the Argyle pipe are predominantly eclogitic, meaning that the carbon is of organic origin (see Natural history of diamonds).

In addition to the pipe itself, a number of semipermanent streams have eroded away portions of the pipe and created significant alluvial deposits of diamonds. These deposits are also actively mined.

Argyle is the fourth-largest diamond-producing mine in the world by volume, averaging annual production of 8 million carats (1,600 kg). Production peaked in 1994, when 42 million carats (8,400 kg) were produced. Since operations began in 1983, Argyle's open pit mine has produced over 750 million carats (150,000 kg) of rough diamonds.

Most of Argyle's gem-quality production is in brown diamonds. These diamonds are usually difficult to sell, although Rio Tinto has seen some success in a decade-long marketing campaign to promote brown diamonds as champagne and cognac toned. In contrast, the company has no problems selling diamonds in pink, purple and red tones, which are very rare and in high demand, therefore commanding premium prices. The pink diamonds are processed and sold as polished diamonds by a specialised team based in Perth to customers worldwide.

The mine has ore processing and diamond sorting facilities on site. Once diamonds are removed from the ore and acid washed, they are sorted and shipped to Perth for further sorting and sale. A significant quantity of diamonds are cut in India, where low costs of labour allow small diamonds to be cut for a profit; this is especially relevant to the Argyle mine, which on average produces smaller rough diamonds than other mines do. 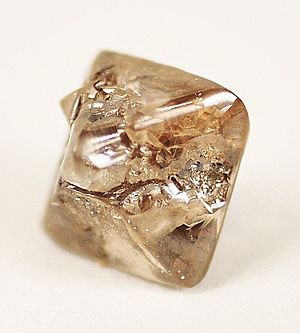 The diamonds produced at the Argyle diamond mine are of an average low quality. Only 5% of mined diamonds are of gem quality, compared to a worldwide average of 20% (Author Janine Roberts contends that the "near-gem quality" rating is subjective and misleading because these diamonds can be cut into gems if desired.); of the remaining 95%, they are about evenly split between classifications of "near-gem quality" and industrial grade; 80% of Argyle diamonds are brown, followed by 16% yellow, 2% white, 2% grey, and less than 1% pink and green. Despite the low production volume of pink and red diamonds, the Argyle mine is the only reliable source in the world, producing 90 to 95% of all pink and red diamonds. Most Argyle diamonds are classified as type 1a (see material properties of diamond), and have low levels of nitrogen impurities, their colour resulting instead from structural defects of the crystal lattice. Argyle diamonds tend to fluoresce blue or dull green under ultraviolet light, and blue-white under X-ray radiation. The most common inclusion is unconverted graphite, followed by crystalline inclusions of orange garnet, pyroxene, and olivine.

Each year since 1984, a small collection of the best pink diamonds has been offered in an exclusive, invitation-only, sale known as the Argyle Pink Diamond Tender. For every 1 million carats (200 kg) of rough pink diamonds produced by the mine, only 1 carat (0.20 g) polished has been offered for sale at the tender.

In March 2009, Argyle announced their first tender of rare blue diamonds. The "Once in a Blue Moon" collection was sourced over several years, and comprised a range of precious blue and violet diamonds, which weighed in total 287 carats (57.4 g).

In 2016, the annual Argyle Diamond Tender became the highest-selling tender in its 20-year history, according to the Diamond Investment & Intelligence Center.

In conjunction with the mine's closure, the 2020 Argyle Tender set further records, and is expected to be the second last such sale.

In 1989–1990, drill samples were taken from over 300 m below the floor of the pit. At the end of 1989 around 238 million tons of ore, with an estimated grade of 3.7 carats per ton were quoted as a resource. Much of this resource was below the open pit and was the subject of an underground mining study carried out in the mid-1990s.

Argyle has just announced on March 2, 2018 that it's estimated Ore Reserves decreased by 13 million tonnes to just 16 million tonnes. They mined 5 million tonnes in 2017. A more conservative view on future production performance and grades could bring forward the economic shut-off criteria.

An exploration decline was constructed at a cost of A$70 million to evaluate the economics of mining diamonds from the diamondiferous pipes below the floor of the open pit; these reserves would be mined underground (by block caving), rather than the open-pit method currently used. In late 2005, Rio Tinto Ltd concluded that the operation was economically feasible. Pre-production construction of the underground mine commenced in early to mid-2006.

The Argyle diamond mine is economically feasible because its large reserves and high-grade ore offset a low average diamond value. The estimated value of Argyle diamond production is only US$7 per carat ($35/g); this compares to values of $70 per carat ($350/g) for diamonds produced at the Diavik mine and US$170 per carat ($850/g) at the Ekati mine, both in Canada.[1] However, Argyle has two to four times the concentration of diamonds (ore grade) of these mines. This makes extraction economically feasible, as mine costs are mostly related to the amount of ore processed, not the amount of diamond extracted. 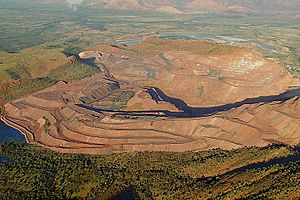 In 2005, Rio Tinto was given the go-ahead to a future expansion project, moving it from an open pit to an underground mine. This plan was postponed; in September 2010 Rio Tinto announced fresh plans to develop an underground mine beneath the existing pit, increasing annual production to 9 million tonnes of ore.

The project is predominantly an underground construction requiring high-quality development and engineering excellence. The Block Cave is expected to operate until the end of 2020 using the latest in mining technology, including Sandvik's auto mining technology. The project is due to be completed by 2013, two years later than first planned, after diamond prices slumped.

All content from Kiddle encyclopedia articles (including the article images and facts) can be freely used under Attribution-ShareAlike license, unless stated otherwise. Cite this article:
Argyle diamond mine Facts for Kids. Kiddle Encyclopedia.