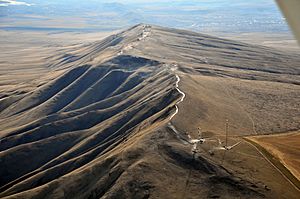 The Arid Land Ecology Reserve is the largest tract of shrub-steppe ecosystem remaining in the U.S. state of Washington. It is managed for the U.S. Department of Energy by the Pacific Northwest National Laboratory (which is operated for the U.S. Department of Energy by Battelle Memorial Institute). The 320 km² area is a portion of the 1500 km² National Environmental Research Park located on the Hanford Site on the northwest boundary of Richland, Washington.

On June 27, 2000, a range fire destroyed most of the native sagebrush and bunchgrass. Though the US Fish and Wildlife Service has attempted to re-introduce native flora, the Arid Lands Ecology Reserve is currently dominated by non-native species such as cheatgrass, knapweeds, and Russian thistle (tumbleweed) which flourished after the 2000 fire. Other species such as spiny hop sage and Wyoming big sagebrush were decimated by the fire and in its aftermath.

All content from Kiddle encyclopedia articles (including the article images and facts) can be freely used under Attribution-ShareAlike license, unless stated otherwise. Cite this article:
Arid Lands Ecology Reserve Facts for Kids. Kiddle Encyclopedia.