The Arkansas–White–Red water resource region is one of 21 major geographic areas, or regions, in the first level of classification used by the United States Geological Survey to divide and sub-divide the United States into successively smaller hydrologic units. These geographic areas contain either the drainage area of a major river, or the combined drainage areas of a series of rivers.

This region includes the drainage of the Arkansas, White, and Red River Basins above the points of highest backwater effect of the Mississippi River. Includes all of Oklahoma and parts of Arkansas, Colorado, Kansas, Louisiana, Missouri, New Mexico, and Texas. 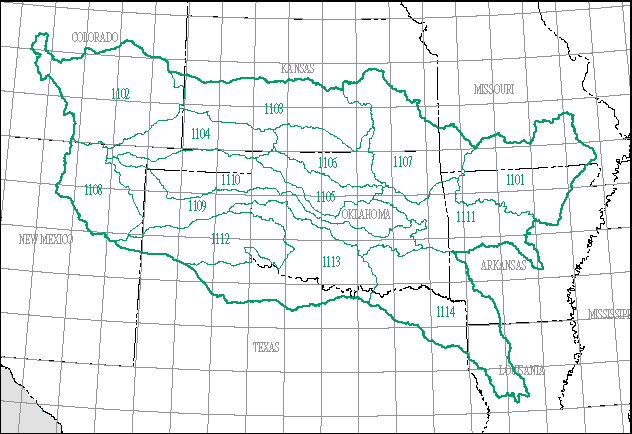 The Arkansas-White-Red region, with its 14 4-digit subregion hydrologic unit boundaries.

All content from Kiddle encyclopedia articles (including the article images and facts) can be freely used under Attribution-ShareAlike license, unless stated otherwise. Cite this article:
Arkansas–White–Red water resource region Facts for Kids. Kiddle Encyclopedia.