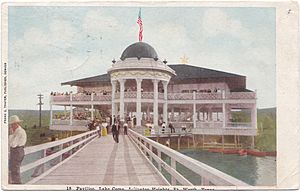 Postcard of a pavilion and Lake Como in Arlington Heights, 1907

Arlington Heights is a neighborhood in Fort Worth, Texas.

A Denver, Colorado-originating promoter named H. B. Chamberlain bought 2,000 acres (810 ha) of land from a Chicago financier named Tom Hurley and Robert McCart. He attempted to develop Arlington Heights, but a hotel he built, Ye Arlington Inn, burned in 1894 and he died in a bicycle accident in London. Arlington Heights was developed after the United States moved military personnel in the surrounding area in World War I.

Joyce E. Williams, a sociologist who wrote Black Community Control: A Study of Transition in a Texas Ghetto, wrote that almost all of the Lake Como women worked in Arlington Heights. Those women referred to it as "Little California", a reference to a fantasy idea of the state of California. 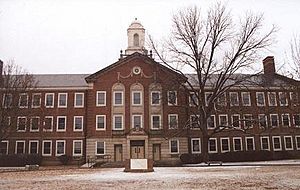 All content from Kiddle encyclopedia articles (including the article images and facts) can be freely used under Attribution-ShareAlike license, unless stated otherwise. Cite this article:
Arlington Heights, Fort Worth, Texas Facts for Kids. Kiddle Encyclopedia.