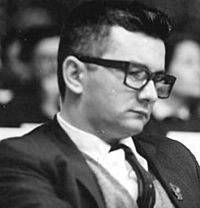 Armando Hart Dávalos (June 13, 1930 – November 26, 2017) was a Cuban politician and a Communist leader. He was born in Havana, Cuba. Before the Cuban Revolution which ousted President Fulgencio Batista, Hart studied to be a lawyer at the University of Havana. While there, he became politically active and would soon join Fidel Castro and Che Guevara in their fight against Batista.

All content from Kiddle encyclopedia articles (including the article images and facts) can be freely used under Attribution-ShareAlike license, unless stated otherwise. Cite this article:
Armando Hart Facts for Kids. Kiddle Encyclopedia.