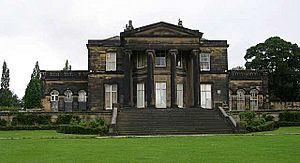 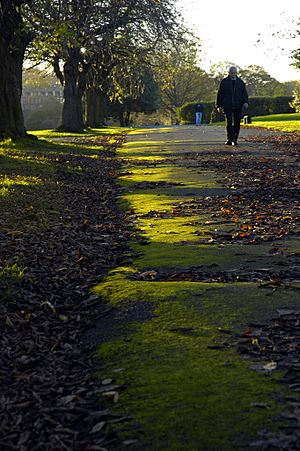 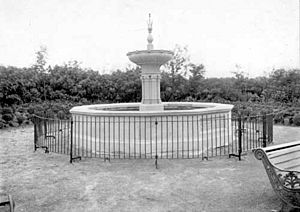 Armley Park, (also known as Gott's Park), is a large public park located next to Stanningley Road in Armley, on the outskirts of Leeds, in West Yorkshire, Northern England.

The park stretches from Armley all the way down the hill to the Leeds and Liverpool Canal, near the canal the park turns to dense woodland.

The park has many amenities, including:

The park is sometimes referred to as Gott's park after the famous industrialist Benjamin Gott who was born, lived, died and was buried in Armley. The park contains Benjamin Gott's former home, Gotts Park Mansion, now the clubhouse of Gott's Park Golf Club. The golf course is on the side of the hill and consequently has some extremely difficult holes.

The park has several grade II listed features including;

All content from Kiddle encyclopedia articles (including the article images and facts) can be freely used under Attribution-ShareAlike license, unless stated otherwise. Cite this article:
Armley Park Facts for Kids. Kiddle Encyclopedia.