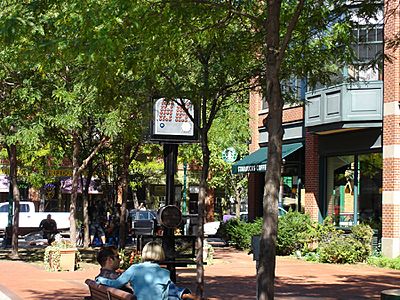 Armory Square is a small neighborhood on the west side of Downtown Syracuse, New York. It began life as a busy commercial and industrial area just to the west of the central city. After World War II, Syracuse's central city became less and less populated as more housing and business facilities were built in the suburbs. In the 1980s, plans were first made to transform the languishing district into a small shopping/arts/nightlife district surrounding the former Syracuse Armory. These plans came to fruition during the 1990s, when new stores and restaurants opened, and several new buildings were constructed in a compatible style to the middle and late 1800s and early 1900s architecture dominating the district.

Today, Armory Square is the home of some of Syracuse's better restaurants, at least two coffeehouses, a radio station company, dozens of small shops selling everything from band instruments to used records to women's clothing, several bars and nightclubs, Urban Outfitters, Armory Massage Therapy, a newly restored upscale hotel, and two tattoo parlors. A number of professional firms are also located in Armory Square, including Eric Mower and Associates, O'Brien & Gere, and the Sugarman Law Firm. The area is popular with students from Syracuse University and Le Moyne College.

Its borders are generally considered to be the circular road around the armory (Jefferson Street) to the south, Onondaga Creek to the west, Washington Street to the north, and Clinton Street to the east.

Armory Square is also home to the Shot Clock Monument.

A paved multi-use trail, the Onondaga Creekwalk, connects the neighborhood with Onondaga Lake.

In June 2009 the book Then and Now: Armory Square was published by Arcadia Publishing. Written by Robert J. Podfigurny and George W. Curry, the book contains side by side historic and current pictures of historic buildings in Armory Square along with information about the buildings, architecture, past tenants, and more. Historic pictures were contributed in part by the Onondaga Historical Association. 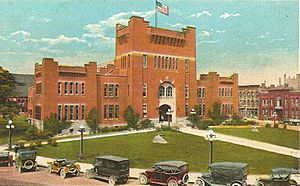 Vintage postcard of the Armory

All content from Kiddle encyclopedia articles (including the article images and facts) can be freely used under Attribution-ShareAlike license, unless stated otherwise. Cite this article:
Armory Square Facts for Kids. Kiddle Encyclopedia.