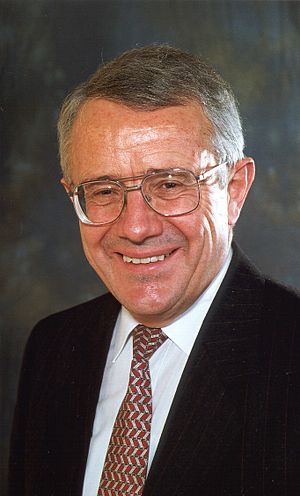 He was elected to the Federal Council of Switzerland on 10 December 1986. He was member of the Christian Democratic People's Party of Switzerland from the canton of Appenzell Innerrhoden. He handed over office on 30 April 1999.

Koller was Chairman of the Board of the Forum of Federations from 2006 to 2010.

During his time in office he held the following departments:

All content from Kiddle encyclopedia articles (including the article images and facts) can be freely used under Attribution-ShareAlike license, unless stated otherwise. Cite this article:
Arnold Koller Facts for Kids. Kiddle Encyclopedia.