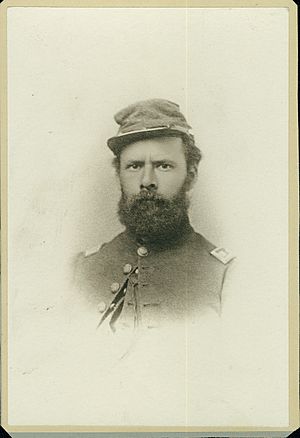 Arnold Sutermeister (July 11, 1830 – May 3, 1907) was a Swiss-born contractor in the West of United States (business in Fort Wayne and Kansas City). Sutermeister was also a Captain in the Civil War where he commanded an artillery battery in the Western Theater.

Arnold Sutermeister was born in Zofingen, Switzerland on July 11, 1830. He studied architecture in Bern and Basel. After his father's death (in 1840) he came to Boston in 1846 with his mother and sister. He moved to Fort Wayne in 1857 where he worked as a mathematics teacher. In 1860 he married Louise Louise Johanna Leibnitz (1836–1906).

When the American Civil War began Sutermeister joined the Union army as Captain of the 11th Independent Battery Indiana Light Artillery on December 17, 1861. Serving in the Western Theater he participated in the Siege of Corinth, the Battle of Chickamauga and the Chattanooga Campaign. During the Atlanta Campaign he commanded the siege artillery of the Army of the Cumberland. Sutermeister was mustered out with his unit on January 7, 1865.

After the war ended Sutermeister returned to Fort Wayne and moved to Kansas City, Missouri. He died on May 3, 1907, and was buried in Elmwood Cemetery. Among Sutermeister′s 8 children are: Arnold Henry Sutermeister (1869–1918); Paul Arthur, the grandfather of Martha L. Ludwig; and Charles Oscar (1867–1937), the father of Robert A. Sutermeister.

All content from Kiddle encyclopedia articles (including the article images and facts) can be freely used under Attribution-ShareAlike license, unless stated otherwise. Cite this article:
Arnold Sutermeister Facts for Kids. Kiddle Encyclopedia.