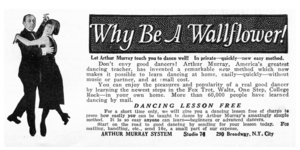 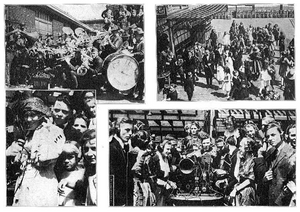 Arthur Murray's 1920 Radio Dance, as portrayed in the 1920 Blueprint; "Ramblin' Wreck" was one of the songs played that night.

Arthur Murray (born Moses Teichman, April 4, 1895 – March 3, 1991) was an American dance instructor and businessman, whose name is most often associated with the dance studio chain which bears his name.

Arthur Murray was born in Galicia, Austria-Hungary, in 1895 as Moses Teichman. In August 1897, he was brought to America by his mother Sarah on the S.S. Friesland, and landed at Ellis Island. They settled in Ludlow Street, in the Lower East Side of Manhattan with his father, Abraham Teichmann.

In 1912, at the age of 17, he taught dance at night while working as a draftsman by day. He studied under the popular dance team of Vernon and Irene Castle and went to work for them.

Murray won his first dance contest at the Grand Central Palace, a public dance hall. He later became a part-time dance teacher there, after graduation from high school. The first prize had been a silver cup, but Murray went home with nothing to show for his win. His partner of the evening took it; it was destined for a pawnshop. This loss made an impression on Murray, and in later years every winner in his dance contests took home a prize.

All content from Kiddle encyclopedia articles (including the article images and facts) can be freely used under Attribution-ShareAlike license, unless stated otherwise. Cite this article:
Arthur Murray Facts for Kids. Kiddle Encyclopedia.