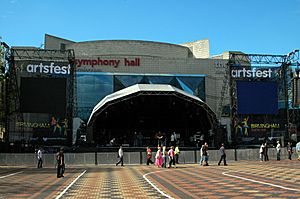 The stage in Centenary Square being assembled for ArtsFest 2007. 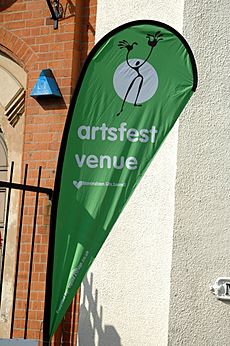 In 2008, flags were placed at ArtsFest venues around the city.

ArtsFest was an annual arts festival held in September in Birmingham, England.

Between 1997 and 2012 ArtsFest brought together free short demonstrations of dance, music, film and theatre to concert halls, theatres, and open-air stages in various parts of central Birmingham. The main location was Centenary Square with events in Chamberlain Square, Victoria Square, Brindleyplace, Eastside, the Custard Factory, and many others.

All content from Kiddle encyclopedia articles (including the article images and facts) can be freely used under Attribution-ShareAlike license, unless stated otherwise. Cite this article:
ArtsFest Facts for Kids. Kiddle Encyclopedia.