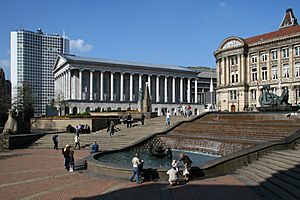 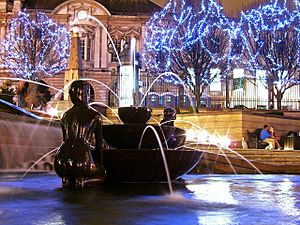 Victoria Square at Night, in February 2008

Victoria Square is a pedestrianised public square in Birmingham, England. It is home to both the Town Hall and the Council House, and directly adjacent to Chamberlain Square.

The square is often considered to be the centre of Birmingham, and is the point from where local road sign distances are measured. It is a short walk from St. Philip's Cathedral on Colmore Row and is on the main pedestrian route between the Bull Ring and Brindleyplace areas. Three major roads, Colmore Row, New Street and Paradise Street meet there.

The square was formerly known as Council House Square, and had a tramway running through it. It was renamed on 10 January 1901, to honour Queen Victoria. She died just 12 days later. A marble statue, donated by Henry Barber and designed by Thomas Brock, was erected and unveiled; it was later recast in bronze.

Part of the square was once occupied by Christ Church (built 1805–13), but the church was demolished in 1899. The font, bell and foundation stone were moved to the new St Agatha's, Sparkbrook, which was built with the proceeds when the site was sold to developers. The 600 bodies, which included John Baskerville, housed in the catacombs beneath the church were moved to Warstone Lane Cemetery. The site was the used for an office and retail block, the Christ Church Buildings, themselves demolished 1970 and replaced with a grassed slope.

During the 1950s, plans were made to widen Colmore Row for it to become part of the Birmingham Inner Ring Road, with a major road junction to be constructed at Victoria Square. These plans were dropped, however a lot of the Inner Ring Road plan was carried through to construction.

During the late 20th century the square was a busy traffic junction. Plans were made to pedestrianise the area and to create a public focal point. An international design competition was held for a central water feature in the square, which was won by Dhruva Mistry. Construction commenced in 1992 and was completed in 1994, when it was officially opened by Diana, Princess of Wales. During the redevelopment of the square, Iron: Man, a sculpture by Antony Gormley was installed and unveiled in 1993. It is rumoured that the statue was hidden from the Princess's view when she opened the square. A plaque is located on the southwestern side of the square to commemorate the opening. 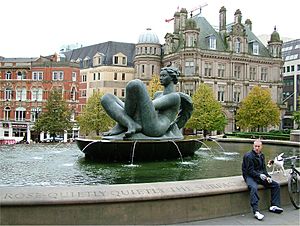 The River, better known as The Floozie in the Jacuzzi

Mistry's fountain The River is the largest sculptural piece in the square Due to the recurring irreparable leaks the fountain was turned off in 2013 in order to save money. On 6 July 2015 the fountain was filled with plants and flowers and no longer functioned as a fountain. 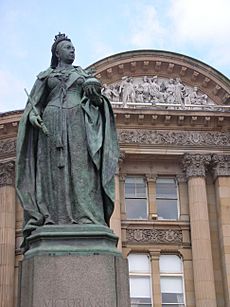 Additionally, there are other pieces not commissioned for the 1992 redevelopment of the square. One of these is Antony Gormley's Iron: Man which was donated to the city in March 1993 by the Trustee Savings Bank, the headquarters of which was located alongside the square. It is 6 m (20 ft) in height, and has been subject to mixed reaction. It was suggested that the statue be moved to the bank's headquarters in Bristol when it merged with Lloyds.

There are also statues that existed prior to the redevelopment of the square. Of two statues that were originally located in the square, only one remains. That is the statue of Queen Victoria, which was originally created in 1901 by Thomas Brock, but recast in bronze by William Bloye in 1951, though the sceptre capital has been missing for some years and is due to be replaced in 2010, that to the research and assistance of the Victorian Society. The plinth was also been replaced in composite Cornish marble in 1951.

The other statue that no longer stands in the square is a statue of King Edward VII, which was moved to Highgate Park when Victoria Square was remodelled in 1951. Following restoration, it was re-erected, on a new plinth, outside Baskerville House in Centenary Square, in November 2010.

There were also statues of Robert Peel, which is now located at the police's training centre Tally Ho!, and Joseph Priestley, which is now in Chamberlain Square.

The square is surrounded by many prominent buildings. On the western side is the Town Hall, on its northern side is the Council House, on its eastern side is 130 Colmore Row and on the south side is Victoria Square House. 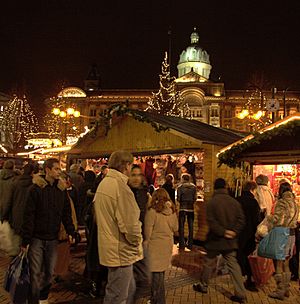 Every Christmas, Victoria Square forms the centrepiece for the Frankfurt Christmas Market and Craft Fair which also extends into New Street and abuts onto a craft fair in Chamberlain Square, with the city's official Christmas tree, donated each year by Sandvik, also standing in the square. The market's wooden huts sell items such as jewellery, artwork, ornaments, clothing and German food.

The Birmingham Big Screen is currently standing in the square following its removal from Chamberlain Square, but for some time after assembly in September 2007, it was not used due to a dispute over the planning process for it. After the dispute over the first planning application, which was approved by the council, another was submitted in December 2008. However, the consultation process stalled following an overwhelming number of objections. The dispute over the 27 ft (8 m) wide screen has cost GB£1 million. However, by April 2012 the screen was working. On Thursday 12 July 2012, HM Queen Elizabeth II and her husband The Duke of Edinburgh visited Victoria Square as part of the West Midland Diamond Jubilee Tour. At the Square, they carried out a walk-about and received a gift from the city of Birmingham.

All content from Kiddle encyclopedia articles (including the article images and facts) can be freely used under Attribution-ShareAlike license, unless stated otherwise. Cite this article:
Victoria Square, Birmingham Facts for Kids. Kiddle Encyclopedia.