Ashleigh and Pudsey facts for kids 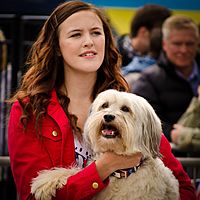 Ashleigh and Pudsey in July 2012

They first achieved prominence as contestants in the sixth series of the television talent show Britain's Got Talent, which they won on 12 May 2012, becoming the first ever dog trick act to win the competition. On 21 July 2017, Ashleigh announced that Pudsey had died.

All content from Kiddle encyclopedia articles (including the article images and facts) can be freely used under Attribution-ShareAlike license, unless stated otherwise. Cite this article:
Ashleigh and Pudsey Facts for Kids. Kiddle Encyclopedia.