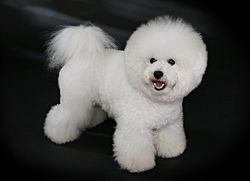 A Bichon Frise is a small, fragile breed of dog. It has a coat that can be solid white, apricot or grey. A white coat is preferred in dog shows. It is also very playful and friendly.

The Bichon Frise is often depicted as a French dog. Although the bichon breed is originally Spanish, used as sailing dogs, but when the French took over this gentle breed became a lap dog species The Bichons were divided into four categories: the Bichon Maltese, the Bichon Bolognaise, the Bichon Havanese and the Bichon Tenerife (this breed). All originated in the Mediterranean area. Because of their merry disposition, they traveled much and were often used as barter by sailors as they moved from continent to continent. The dogs found early success in Spain and it is generally believed that Spanish seamen introduced the breed to the Canary Island of Tenerife. In the 14th century, Italian sailors rediscovered the little dogs on their voyages and are credited with returning them to the continent, where they became great favorites of Italian nobility. Often, as was the style of the day with dogs in the courts, they were cut "lion style," like a modern-day Portuguese Water Dog.

Though not considered a retriever or water dog, the Bichon, due to its ancestry as a sailor's dog, has an affinity for and enjoys water and retrieving. On the boats however, the dog's job was that of a companion dog.

The "Tenerife", or "Bichon", had success in France during the Renaissance under Francis I (1515–1547), but its popularity skyrocketed in the court of Henry III (1574–1589). The breed also enjoyed considerable success in Spain as a favorite of the Infantas, and painters of the Spanish school often included them in their works. For example, the famous artist, Francisco de Goya, included a Bichon in several of his works.

Interest in the breed was renewed during the rule of Napoleon III, but then waned until the late 19th century when it became the "common dog", running the streets, accompanying the organ grinders of Barbary, leading the blind and doing tricks in circuses and fairs.

On 5 March 1933, the official standard of the breed was adopted by the Société Centrale Canine, the national kennel club for France. This was largely due to the success of the French-speaking Belgian author Hergé's The Adventures of Tintin, which featured a small, fluffy, white fox terrier dog named Milou (Snowy in the English editions). As the breed was known by two names at that time, "Tenerife" and "Bichon", the president of the Fédération Cynologique Internationale proposed a name based on the characteristics that the dogs presented – the Bichon Frisé. ("Frisé" means "curly", referring to the breed's coat.) On 18 October 1934, the Bichon Frisé was admitted to the stud book of the Société Centrale Canine.

The Bichon was brought to the United States in 1955. The first US-born Bichon litter was whelped in 1956. In 1959 and 1960, two breeders in different parts of the USA acquired Bichons, which provided the origins for the breed's development in the USA.

The Bichon was introduced into Australia in 1976. The first Bichon in Australia was Am Ch Beaumonde The Snowdrift of Leander imported by Harry and Margaret Begg. The first registered litter was in March 1977 bred by Diane Crosby-Browne sired by Ch Leander Snow Cap out of Leander Snow Bubble. 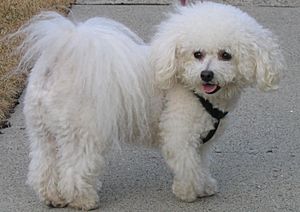 Bichon Frise in a pet trim

The Bichon Frise is a small dog that weighs approximately 5–10 kg (10–20 lbs) and stands 23–30 cm (9–12 in) at the withers, but slightly larger dogs are not uncommon. The skull is slightly rounded and the muzzle is not pointy. The tail is groomed to be long and curly and is carried over the back. It has a black nose and dark round eyes; its white hair consists of a curly, dense coat with little shedding (much like a poodle in this respect), although many of the breed do tend to have less curly hair than others. A small amount of buff, cream, or apricot color may be seen around its ears, snout, paws or body, but normally these colors do not exceed 10% of its body. FCI/AKC Standard coat color is pure white; other colors such as apricot or grey are not recognized. A white coat is preferred in the show ring. The head and legs are proportionate in size to the body, and the ears and tail are natural (not docked or cropped). The coat is trimmed often to make the hair seem like an even length. Bichon Frises can have a medium-high intelligence.

The American Kennel Club (AKC) refers to the Bichon Frise as "merry" and "cheerful", and the breed standard calls for a dog that is "gentle mannered, sensitive, playful and affectionate". The Bichon Frise loves human company and demands much of your attention. They are generally very sociable and do well with an owner that takes them along on outings. They are charming, affectionate, and intelligent. Bichons do well with children because they are playful and have lots of energy. If affiliated with a particular territory and encouraged by owners, they can become very territorial. Bred to be companion dogs, the Bichon Frise tends to get along well with both children and other animals.

Bichon Frises are very obedient if training is started early and continued constantly.

Bichon Frises are prone to scratching and chewing on themselves which commonly results in serious skin conditions. They are hypoallergenic but they themselves suffer from allergies to fleas, chemicals, pollen, dust, etc. Loose knee joints, ear infections, cataracts, diabetes, and heart disease are also common ailments that the breed is known to suffer from.

Bichon Frises often appear on lists of dogs that do not shed (moult). The grooming required to maintain the Bichon Frise's coat helps remove loose hair, and the curl in the coat helps prevent dead hair and dander from escaping into the environment, as with the poodle's coat. The frequent trimming, brushing, and bathing required to keep the Bichon looking its best removes hair and dander and controls the other potent allergen, saliva.

It is best to have a Bichon Frise groomed approximately every four to eight weeks. Daily brushing of the coat helps to prevent matting. If a Bichon's coat gets severely matted, they may develop a hematoma, most likely in the ears.

Bichon Frises are considered suitable for people with allergies, as they are bred to be hypoallergenic. It is important to note that human sensitivity to dog fur, dander, and saliva varies considerably. Although hair, dander, and saliva can be minimized, they are still present and can stick to "clothes and the carpets and furnishings in your home"; inhaling the allergens, or being licked by the dog, can trigger a reaction in a sensitive person. 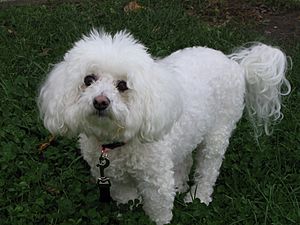 The oldest Bichon Frises for which there are reliable records in various US/Canada surveys have died at 19 years.

All content from Kiddle encyclopedia articles (including the article images and facts) can be freely used under Attribution-ShareAlike license, unless stated otherwise. Cite this article:
Bichon Frisé Facts for Kids. Kiddle Encyclopedia.