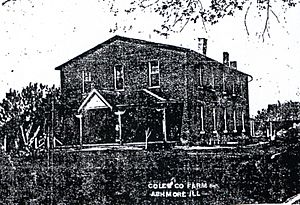 From 1857 until 1869, the Coles County Poor Farm was located in Charleston Township near the small town of Loxa, Illinois. In 1870, the county purchased 260 acres from A. N. Graham in Section 35 of Ashmore Township for a new farm, which sat astride the Indianapolis & St. Louis Railroad. This small timber and brick building, constructed by H. B. Truman, was the first to sit on that property. It was 38 x 58 feet and two storeys tall, with an attached kitchen. The initial superintendent or "Overseer of the Poor" of the county farm was Oliver D. Hawkins, who immigrated to Coles County from Kentucky in 1841.

Many of the inmates died at the farm, and the county maintained a small cemetery somewhere north of the grounds. In 1879, Joshua Ricketts, superintendent of the county farm at the time, had recorded 32 deaths out of the roughly 250 inmates who had stayed at the farm between 1870 and 1879. Another pauper cemetery, established a few years later, still exists south of Route 16 and now contains the graves of between 60 and 100 people.

The Board of State Commissioners of Public Charities visited the poor farm in 1902. "The heating is by stove and is sufficient", they reported. "There is no regular system of ventilation, but plenty of fresh air is easily obtained. There is no plumbing ... There is no fire protection." As for the condition of the mentally ill at the farm, they wrote: "There is no special provision for the insane ... None are locked up or in restraint." By 1911, however, the Auxiliary Committee of the State Board of Charities condemned the almshouse for its "vermin infected walls", "rough floors", "small windows", and improper ventilation. It was reported that "flies swarmed everywhere" and "were especially noticeable on the poor food prepared for dinner". In January 1915, the Almshouse Committee, headed up by John Goodyear, Ivory W. Merritt, Jr., E.N. Carter, W.R. Zimmerman, and William Knollenberg, received bids for the construction of a new "fireproof" building at the location.

The building contract for the new almshouse was first awarded to S.C. Sailor of Oakwood, Illinois, but he backed out of the project in late February 1916. The contract was then granted to J.W. Montgomery in March for $20,389, and the cornerstone was ceremoniously laid on May 17, 1916. A full-time caretaker and his family took turns living in the almshouse and a white farmhouse that formerly sat on the property. Nancy Swinford, the daughter of Leo Roy and Lura Andrews, lived at the home for eight years during the 1940s and 1950s. In a 2009 interview with the Times-Courier, Swinford said: "It certainly did a lot of people a lot of good. They were warm and had good food on the table. And, they loved working and earning their keep. They weren’t moochers ... They mostly grew their own food, did their own butchering, and smoked the meat. They smoked their own bacon and hams in the smoke house, they killed and dressed all their own chickens, and made their own butter."

Coles County retained the farmland around the property, but sold the almshouse to Ashmore Estates, Inc. in February 1959. That corporation opened the building as a private psychiatric hospital by the same name. In October 1964, after only five years in operation, the psychiatric hospital closed down because of debt. The institution re-opened in 1965, but changed its focus from a private facility to one that accepted patients from state mental institutions. By 1968, the shelter care facility housed 49 residents, including 10 afflicted with epilepsy.

Paul Swinford (no relation to Mary Swinford) and Galen Martinie purchased the institution in July 1976. The two originally envisioned building a brand new, one floor residency to house up to 100 patients, but the state planning committee refused to approve that plan after considering it for six months. Consequently, Swinford and Martinie invested over $200,000 in the construction of a modern addition onto the old building. Construction began in 1977, but was not finished until the 1980s. Once the addition to Ashmore Estates had been completed and the rest of the building was brought up to code, the institution's future appeared brighter. On December 12, 1981, Barbara Jean Clark became director of the care facility. "We have the opportunity to be one of the best facilities of our kind in the area", she remarked in their eight page in-house organ, The Ashmore Review.

In February 1986, Paul Swinford entered into a limited partnership with a Peoria-based company known as Convalescent Management Associates, Inc. to help manage the institution's finances. The departments of Public Aid and Public Health dragged their feet over the issuance of proper licences and certificates for nearly a year, leading Swinford to file for permission from the Illinois Health Facility Planning Board to close the facility. At that time, Ashmore Estates' financial losses exceeded $1.5 million. By the end of April, all of the residents had been transferred to area homes, and Ashmore Estates closed its doors.

In August 2006, Scott Kelley purchased Ashmore Estates from Arthur Colclasure and began renovating. According to Scott: "The building was a wreck ... it took seven weeks of 40 hours a week to clean it out ... the windows were mostly broken." To finance the project, the Kelleys offered flashlight tours of the interior. To discourage trespassers, they erected signs and moved onto the property. Their haunted house opened on October 13, 2006. In the off-season, Scott offered overnight stays in the building called a "Night of Insanity", featuring speakers, movies, and guests such as psychic medium Cari Stone from The Cari Stone Show.

In January 2013, Ashmore was hit by a fierce storm, with windspeeds reaching 80 to 100 mph. Ashmore Estates suffered considerable damage; its roof was blown off and the support gables were destroyed. Director Dan Ensign of the Coles County Emergency Management Agency said that the building appeared to be damaged beyond repair. The Kelleys' home, adjacent to the property, escaped largely unscathed.

Scott Kelley sold the building at auction in April 2013 for a price of $12,700 to Robert Burton & Ella Richards. They sold in May 2014 for an undisclosed amount to Robbin Terry, owner of the R Theater in Auburn, IL. Robbin has replaced the roof, installed bathrooms, shower, kitchenette and made many other renovations to the building for safety and preservation of the building. Under Robbin's ownership, the building will no longer function as a haunted house, instead being preserved as a historical location and paranormal investigation location.

On May 2, 2014 the building and property was sold to Robbin & Norma Terry. The building was in disrepair when they purchased it but through their efforts and many volunteers in the paranormal community they have managed to bring the building back to life in years, largely restoring it to its original appearance. The plan for the building is to continue with paranormal investigations. The Terrys have said they have no intention in bringing a haunted attraction back to the building, but have enjoyed returning the building to be enjoyed by many.

After being abandoned in 1987, Ashmore Estates gained notoriety as a local curiosity and was subjected to trespass and vandalism. Rumours spread that the building was haunted. For the Halloween issue of the Verge section of The Daily Eastern News, Mike Rice and Matt Fear wrote a satirical piece on how to make Ashmore Estates into a "highly illegal" Halloween escapade. "No one is really sure what this building once housed", they wrote. "But there are stories. These tales revolve around pagan rituals and dismembered bodies. We aren’t sure if any of them are true or not, but they sure do make for three floors ... of unadulterated fun." In 2004, Michael Kleen included Ashmore Estates in a collection of short historical fiction stories set in Coles County called Tales of Coles County, Illinois. The story involved a man named Darby and his daughter who stayed at the poor farm during the Great Depression. Darby was tormented by the ghost of a girl named Elva Skinner, who died in a fire in the original almshouse. Since publication, several people have claimed that the ghost of Elva actually haunts the building. A new edition of Tales of Coles County was released in 2010.

As soon as Scott Kelley opened the building for tours in 2006, locals, as well as self-styled paranormal investigators, lined up to take a look inside. In the summer of 2008, Christopher Saint Booth and Philip Adrian Booth, producers of documentaries such as Spooked (2006) and Children of the Grave (2007), filmed at Ashmore Estates. Of their visit, The Daily Eastern News wrote: "Full body apparitions, black mists, and a death-filled history. There couldn't be a more perfect place for a paranormal investigation than Ashmore Estates." A chapter on the history, folklore, and ghost stories of Ashmore Estates was included in the book Paranormal Illinois.

All content from Kiddle encyclopedia articles (including the article images and facts) can be freely used under Attribution-ShareAlike license, unless stated otherwise. Cite this article:
Ashmore Estates Facts for Kids. Kiddle Encyclopedia.