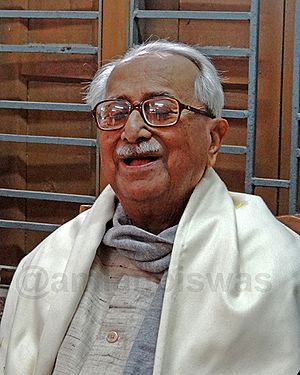 Ashok Ghosh (2 July 1921 – 3 March 2016) was an Indian Bengali politician. He was the senior leader of All India Forward Bloc political party. He held the position of the state general secretary of Forward Bloc in West Bengal from 1946 until his death in 2016.

Ghosh died in Kolkata from multiple organ failure on 3 March 2016. He was 94 years old.

All content from Kiddle encyclopedia articles (including the article images and facts) can be freely used under Attribution-ShareAlike license, unless stated otherwise. Cite this article:
Ashok Ghosh Facts for Kids. Kiddle Encyclopedia.