Hakea cinerea, commonly known as ashy or grey hakea, is a shrub in the family Proteaceae native to areas along the south coast in the Goldfields-Esperance region of Western Australia. It is a showy ornamental species bearing creamy-white flowers aging to orange with contrasting ash coloured grey-green leaves. 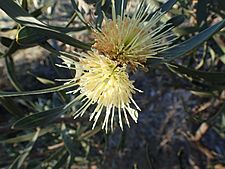 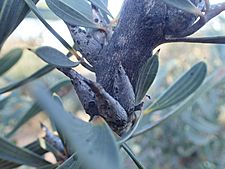 Hakea cinerea was first formally described by Robert Brown in 1810 and published in Transactions of the Linnean Society of London. The specific epithet (cinerea) is derived from the Latin word cinereus meaning "of ashes", "ash coloured" or "ashen", referring to the colour of the foliage.

Hakea cinerea is found from Ravensthorpe to Esperance and Israelite Bay. Has also been recorded at Point Culver at the western end of the Great Australian Bight. This species grows in a well-drained sunny site, preferring low-lying deep sand in heath, gravelly soils or low scrubland. An ornamental species good for windbreak or wildlife habitat.

Hakea cinerea is presently classified "not threatened" by the Western Australian Government Department of Parks and Wildlife.

All content from Kiddle encyclopedia articles (including the article images and facts) can be freely used under Attribution-ShareAlike license, unless stated otherwise. Cite this article:
Ashy Facts for Kids. Kiddle Encyclopedia.