Ravensthorpe is a town 541 km south-east of Perth, 40 km inland from the south coast of Western Australia. It is the seat of government of the Shire of Ravensthorpe. At the 2006 census, Ravensthorpe had a population of 438.

In 1848, the area was surveyed by Surveyor General John Septimus Roe who named many of the geographical features nearby, including the nearby Ravensthorpe Range that the later town was named after. There was also one of the Western Australian Government Railways isolated branch lines between Hopetoun and Ravensthorpe, the line opened in 1909. 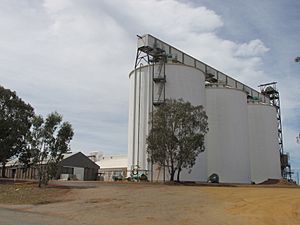 A temporary pastoral lease ("Free Run") was registered by James Dunn senior in 1868. His five sons and daughter started sheep farming at the property, Cocanarup (20 km west of the present town), in 1871, after George and John Dunn drove a herd from Albany. In 1873 the family was granted a permanent lease of 4,049 hectares (10,010 acres).

By 1901, the population had climbed to over 1,000 and the government gazetted the town, renaming it Ravensthorpe. The area continued to prosper and the population grew accordingly, by 1909 the population was over 3000. The prosperity was short-lived; World War I took its toll on the town and by 1918 the local copper smelter had closed and many of the copper and gold mines had closed. The population of the town in 1968 was approximately 800 people.

After the war Ravensthorpe survived servicing the farming in the district. Agriculture in the area began to grow following the great depression and pastoral land releases occurred in the 1960s and 1970s. The surrounding areas produce wheat and other cereal crops. The town is a receival site for Cooperative Bulk Handling. A bulk wheat bin was constructed in the town in 1947 capable of holding over 30,000 bushels. 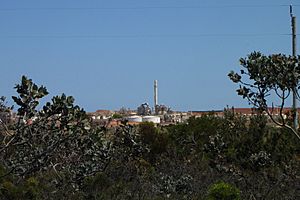 BHP Billiton commenced a feasibility study in 2002 into opening a nickel and cobalt mine and processing plant 35 km East of the town The project was approved in 2004 and construction commenced shortly afterward. The plant known as the Ravensthorpe Nickel Project was commissioned in late 2007 with first production occurring in October and the first 5000 tonnes being produced by December 2007. The plant was officially opened in 2008.

In January 2009, BHP Billiton announced that it was suspending production at the Ravensthorpe nickel mine indefinitely, due the reduction in world nickel prices caused by the global economic crisis. The decision cut 1,800 jobs and is expected to have a major impact on the local economy.

On 9 December 2009, BHP sold its Raventhorpe mine, on which it had spent A$2.4 billion to build, to Toronto-based First Quantum for US $340 million. First Quantum was one of three bidders for the mine and actually produced the lowest offer. The Canadian company planned to have the mine back in production in mid-2011.

As of July 2016 the mine is still operating under First Quantum.

The Mt Cattlin mine, located 2 km (1.2 mi) north of the town, was operated by Galaxy Resources between 2009 and 2012 before being placed on care-and-maintenance between 2013 and 2016. Following a plant refurbishment, mining at Mt Cattlin recommenced in March 2016, with first tantalum production in May 2016.

The Ravensthorpe Copper Mine operated in the area in the 1960s. In 1967 the mine produced 3,276 metric tons (3,224 long tons) of copper concentrate averaging about 23% Copper. The concentrate was trucked to the port of Esperance for shipment to Japan.

Ravensthorpe has a semi-arid climate (BSk) with a Mediterranean rainfall pattern.

All content from Kiddle encyclopedia articles (including the article images and facts) can be freely used under Attribution-ShareAlike license, unless stated otherwise. Cite this article:
Ravensthorpe, Western Australia Facts for Kids. Kiddle Encyclopedia.