The Asian, also known as the Malayan, is a cat breed similar to the Burmese but in a range of different coat colours and patterns. Long-haired Asians of all varieties are called Tiffanies. Asians are grouped in the foreign section at cat shows.

The breed was developed in Britain, starting with a litter of kittens bred in 1981 by Baroness Miranda von Kirchberg.

It has a broad, rounded chest and slender legs. Its tail is a medium length. The pleasantly rounded head has no flattened areas, and there is a very visible spot in its profile. This gives the Asian a full-looking face. The round and wide-set eyes come in the colour of yellow. Females are not quite as big as the males. They can weigh anywhere from 6–13 pounds. 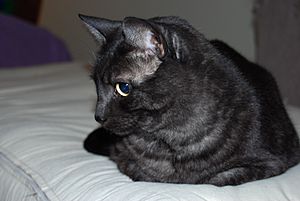 The short-haired coat of the Asian is fine, satiny and glossy, and can be multiple colors and patterns. Asian Shorthairs are classified in four different varieties: the Asian Self (including the Bombay, which is a black Asian Self), the Asian Tabby, the Asian Smoke and the Burmilla (which is a shaded Asian).

Asians are very affectionate and good with kids. They share similar traits with their brother, the Burmese. They love to explore and even enjoy traveling by way of a cat carrier. They are quite a talkative and rather loud cat with an apparent strong will. These cats will make sure that you give it the attention it seeks and always seem to want to be held and hugged. They will constantly interact with people, even strangers. They love to play and cuddle.

It makes a good apartment cat, especially if owners will give it safe non-poisonous house plants near the windowsill, which the cat can explore. However, it is recommended that the Asian can only live in apartments, if it does not involve the city. The Asian does not enjoy loud noises from automobiles, buses, or trucks. So if needed to live in an apartment, it must be one near a peaceful suburb. The Asian is not a city cat.

In order to take care of an Asian cat's shiny coat, they should be brushed every week. Since they are short-haired, they don't shed as much.

These cats tend to live between 12-18 years. As a result of their face structure, they can have snoring issues, but other than that they don't have too many problems.

The Asian's faults vary: it should have blue or green eyes; they should always be solid-colored, with no white spots or streaks; the tail should never become truncated, crooked, or very kinky.

The females go into their first heat at about seven to eight months old. Although it is registered as a separate breed, the breed can be born spontaneously of Burmese parents, since so related. One kittening can produce both Burmese and Asian young, surprisingly.

All content from Kiddle encyclopedia articles (including the article images and facts) can be freely used under Attribution-ShareAlike license, unless stated otherwise. Cite this article:
Asian cat Facts for Kids. Kiddle Encyclopedia.