The Bombay cat is a type of short-haired cat developed by breeding sable Burmese and black American Shorthair cats, to produce a cat of mostly Burmese type, but with a sleek, panther-like black coat. Bombay is the name given to black cats of the Asian group.

The breed was developed by Nikki Horner, a breeder from Louisville, Kentucky, who, starting in 1958, attempted to create a breed of cat that resembled a miniature black panther. The first attempt was a failure but the second, in 1965, was successful. The breed was officially recognized and registered by the Cat Fanciers' Association in 1970 and The International Cat Association in 1979. Nikki Horner died in 1995.

The Bombay is a short-haired breed of domestic cat, closely related to the Burmese. Bombay cats are typically characterized as having an all black coat, black soles, black nose and mouth, with copper or green eyes. The close-lying, sleek and glossy black coat is generally colored to the roots, with little or no paling.

The Bombay has a medium body build that is muscular. Their weight is usually 8 to 15 pounds (3.6 to 6.8 kg) with males typically being heavier than females.

A healthy Bombay can live approximately 15 to 20 years. They can have some sinus problems, snuffly noses and gingivitis. Their food intake should be controlled to avoid overfeeding. 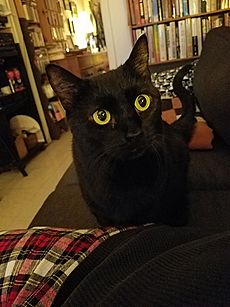 Bombay cats are highly social and brave; they tend to be attached to their families and crave attention, and for this reason, cats of this breed are highly suitable for children. Most Bombay cats are not independent, however many older Bombays are more independent when compared with younger cats. They seek attention from their owners and people around them often and dislike being left alone for extended periods of time. Although they like to be around people generally, Bombay cats also tend to have a certain person whom they pay special attention to in their lives. Overall, the Bombay breed is intelligent, playful, and attention-seeking. The Bombay's muscular medium-sized body can be deceiving, as they often weigh slightly more than they might appear to. They don't shed as much as other breeds and require very little grooming. They tend to get along well with other cats, as they have an established pecking order in the household. They have a loud distinctive purr. Bombay cats are known to be vocal and they cry and meow more than other cats.

All content from Kiddle encyclopedia articles (including the article images and facts) can be freely used under Attribution-ShareAlike license, unless stated otherwise. Cite this article:
Bombay cat Facts for Kids. Kiddle Encyclopedia.