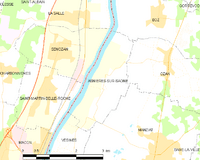 Map showing Asnières-sur-Saône relative to other communes of Ain

Asnières-sur-Saône is a commune. It is found in the Auvergne-Rhône-Alpes region in the Ain department in the east of France. In 2009, 73 people lived in the commune. The inhabitants are the Asniérois. Famous people from Asnières-sur-Saône include José Mingret, a French painter in the 20th century who was inhumated there. The commune has been twinned with Bad Waldsee in Germany since 1991.

All content from Kiddle encyclopedia articles (including the article images and facts) can be freely used under Attribution-ShareAlike license, unless stated otherwise. Cite this article:
Asnières-sur-Saône Facts for Kids. Kiddle Encyclopedia.