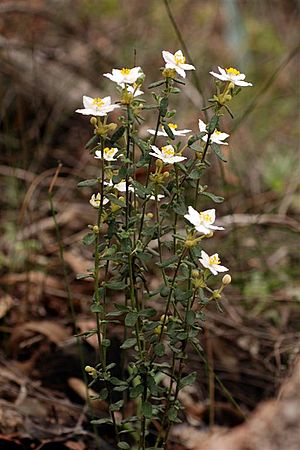 Asterolasia nivea, commonly known as Bindoon starbush, is a species of weak sub-shrub that is endemic to the southwest of Western Australia. It has leathery oblong to narrow elliptical leaves and white flowers arranged in groups of about three flowers with thick-centred, shield like, star-shaped hairs on the back of the petals.

Asterolasia nivea is a weak sub-shrub that typically grows to a height of about 50 cm (20 in). The leaves are narrow oblong, to elliptical, about 12 mm (0.47 in) long on a short petiole. The leaves are covered with star-shaped hairs. The flowers are arranged in groups of about three in leaf axils and on the ends of branchlets, each flower on a pedicel up to 15 mm (0.59 in) long and covered with thick-centred, star-shaped hairs. The petals are white, elliptical, 8–10 mm (0.31–0.39 in) long with thick-centred, star-shaped hairs on the back that formed a shield over the flower bud. There are between fifteen and twenty stamens.

In 2017, Juliet A. Wege published a paper in Nuytsia suggesting that A. nivea is a white flowered form, and that the name A. nivea is a synonym of A. grandiflora. This change has been accepted by the Western Australian Herbarium but not as yet by the Australian Plant Census.

Asterolasia nivea grows in gravel between New Norcia and Bindoon in Western Australia.

All content from Kiddle encyclopedia articles (including the article images and facts) can be freely used under Attribution-ShareAlike license, unless stated otherwise. Cite this article:
Asterolasia nivea Facts for Kids. Kiddle Encyclopedia.