New Norcia is a town in Western Australia, 132 km (82 mi) north of Perth, near the Great Northern Highway. It is situated next to the banks of the Moore River, in the Shire of Victoria Plains. New Norcia is the only monastic town in Australia, with its Benedictine abbey founded in 1846. The monks later founded a mission and schools for Aboriginal children. A series of Catholic colleges were created, including the school that became St Benedict's College in 1965.

The town has many heritage sites and places of interest. A ground station for the European Space Agency is located 8 km (5.0 mi) south of the town. Since a road bypass was complete in 2017, heavy traffic bypasses the town.

On 1 March 1846, a Benedictine mission to the local native Aboriginals was started about 8 km (5 mi) to the north, led by the two Spanish Benedictines, Rosendo Salvado and Joseph Serra.

Within a year the mission was moved to where the town is today, and on 1 March 1847 the foundation stone of the monastery was laid. 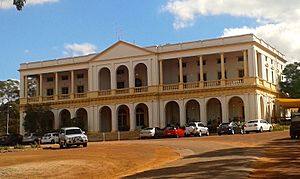 The town of New Norcia has buildings in a Spanish style of architecture, along with some other historical sites. Among these are the two old boarding schools, St Ildephonsus' and St Gertrude's (both now used for accommodation and various social functions), the Abbey Church (containing the tomb of Rosendo Salvado), an old mill, a wine press, a hotel and the monastery itself.

The town has attracted interest and tourist visits for most of its existence, and as a consequence a number of guide books and histories have been produced.

Tours of the town are operated daily by the Friends of New Norcia, who also organise the accommodation in the various buildings including the monastery retreat.

The Benedictine monks continue to occupy the monastery and are involved with most of the enterprises in the town. The last Spanish Benedictine monk of New Norcia died on 18 January 2010, aged 99. He continued to prepare the bread for the monks and olive oil almost upon his death..

Today New Norcia is increasingly well respected in Australian culinary circles for its quality bakery (built in 1886) offering breads, nutcake and biscotti. Also maintaining olive oil production and locally made wines; port and ale can be purchased at the community or from special outlets.

The Benedictine abbey was founded on 1 March 1846 by a Spanish Benedictine, Rudesindus Salvado, for the Christianising of Australian Aborigines. It is situated 132 kilometres from Perth, the state capital; its territory was bounded on the south and east by the then Diocese of Perth, and on the north by the Diocese of Geraldton.

This mission at first had no territory. Its founder lived in the wilderness, leading the same nomadic life as the indigenous people whom he had come to convert. His food was of the most variable character, consisting of wild roots dug out of the earth by the spears of his neophytes, with lizards, goannas, even grubs in times of distress, or, when fortunate in the chase, with the native kangaroo.

After three years of hardships amongst the local people, Salvado came to the conclusion that they could be converted to Christianity. Assisted by some friends, he started for Rome in 1849 to procure auxiliaries and money to assist him in his work. Whilst in Rome, he was appointed Bishop of Roman Catholic Diocese of Victoria (Australia) in Northern Australia, being consecrated on 15 August 1849. Before he left Rome, all of the people of Port Victoria had abandoned the diocese for the goldfields. Salvado then implored the pope to permit him to return to Australia. He set out for Spain and obtained there monetary assistance and over forty young volunteers. All these afterwards became Benedictines. They landed in Australia in charge of their bishop on 15 August 1852.

Bishop Salvado, with his band of willing workers, then commenced operations. They cleared land for the plough and introduced the natives to habits of industry. They built a large monastery, schools and orphanages for the young, cottages for the married and flour-mills to grind their wheat. An important village soon sprang up, in which many natives were fed, clothed and converted to Christianity.

On 12 March 1867, Pius IX made New Norcia an abbey nullius and a prefecture Apostolic with jurisdiction over a territory of 16 square miles, the extent of Bishop Salvado's jurisdiction until his death in Rome on 29 December 1900 in the eighty-seventh year of his age and the fifty-first of his episcopate.

Father Fulgentius Torres OSB was elected Abbot of New Norcia in succession to Bishop Salvado on 2 October 1902. The new abbot found it necessary to frame a new policy for his mission. Rapid changes were setting in; agricultural settlers were taking up the land, driving out the sheep and cattle lords, and absorbing the labour of the natives. The mission had now to provide for the spiritual wants of the white population and Abbot Torres boldly faced the situation by entering upon a large scheme of improvements in and around the monastery. With the approbation of the Holy See, he had the boundaries of the abbey extended to embrace the country between 30º and 31º 20' S. latitude and between the sea and 120º E. longitude - a territory of over 30,000 sq. miles (nearly as large as Ireland or the State of Maine). Torres brought out many priests and young ecclesiastics for the monastery and parochial work, and built churches in the more settled districts of his new territory. Since Torres became superior in 1901, the number of churches has increased from one to ten. To foster higher education, Torres erected a convent and girls' college and a similar institution for boys. He completed a large girls' orphanage. All these works were accomplished at the expense of the Benedictine community. Abbot Torres did confine his energies solely to New Norcia. He founded the "Drysdale River Aborigines Mission", 2000 miles away, in the extreme north-west of Australia, an unexplored land inhabited only by local Aborigines. This mission was opened on 12 July 1908 with a party of 15 in charge of two priests.

Torres was consecrated bishop in Rome on 22 May 1910. On the fourth of the same month, by a Decree of the Congregation Propaganda Fide, he was appointed administrator Apostolic of Kimberley, and had the "Drysdale Mission" erected into an abbey nullius. He has now under his jurisdiction a territory of 174,000 square miles—an area nearly as large as Pennsylvania, Ohio, Indiana, West Virginia, and Maine. The position in 1910 of the mission was: churches, 10; priests, 17 (secular, 7); monastic students, 9; other religious, 33; nuns, 18; high school, 1; primary schools, 4; charitable institutions, 2; children attending Catholic schools, 350; Catholic population, 3000.

There are 11 monks living in the monastery, ranging in age from 40 to 95. They pray together seven times a day.

From 1983 until 1997, the Territorial Abbey had been suppressed into the Archdiocese of Perth and Spearritt worked as an administrator.

The abbey buildings are on the eastern side of the current highway alignment through the town.

There are two pipe organs located within the abbey buildings. In the Abbey Church of the Holy Trinity is a large German organ, built in 1922 by Albert Möser of Munich, with 34 speaking stops. The organ was designed in consultation with the abbey organist, Dom Stephen Moreno.

The second pipe organ, of 11 speaking stops and much more modern in style, is located in the oratory chapel. This organ was built in 1983 by Bellsham Pipe Organs.

With decreasing numbers of active colleges, and changes in the organisation of the town, some buildings and sites have been restored and incorporated into a heritage trail within the town. The following buildings are among the heritage buildings situated on the site of the Monastery, which is registered on the Register of the National Estate and classified by the National Trust of Australia WA:

All content from Kiddle encyclopedia articles (including the article images and facts) can be freely used under Attribution-ShareAlike license, unless stated otherwise. Cite this article:
New Norcia, Western Australia Facts for Kids. Kiddle Encyclopedia.