In the year 2735, mankind has begun to venture into space to find a new home after Earth's environment succumbs to global warming and the bombardment of asteroids into the atmosphere. During their voyage, the Space Migration Fleet encounters an alien race from the planet Iccus. As raiders of natural resources, the aliens are bent on galactic domination. To combat the threat, six young fighters are recruited into the Sky Arrow Flight Team and are equipped with transformable Type Yi fighter planes.

The Sky Arrow Flight Team is equipped with three YF-10 and three YF-11 Type Yi transformable fighters. Each fighter is capable of transforming into robot mode, as well as the hybrid "Falcon" mode (similar to the GERWALK mode of the VF-1 Valkyrie from Macross). All fighters are equipped with Gun Pods and an array of missiles, but each unit has a weapon and livery unique to its pilot and their "Ultimate Skill" (similar to the Trans-Am System used in Mobile Suit Gundam 00):

The Space Migration Fleet also has other squadrons of Type Yi fighters flown by regular pilots, though they are rarely featured throughout the series.

According to the series' official blog website, Astro Plan was created to educate children ages 6–14 of justice and peace, as well as promote the cultural aspect of Chinese animation. The YF-10 and YF-11 Type Yi fighters are closely patterned after the People's Liberation Army Air Force main fighter aircraft - the Chengdu J-10 and Shenyang J-11, respectively.

In addressing the issue of plagiarism, the blog states that animation originated in Europe, but was copied and popularized by the United States before Japan and South Korea followed suit, and that the Chinese animation industry is simply following the pattern of its Asian neighbors. 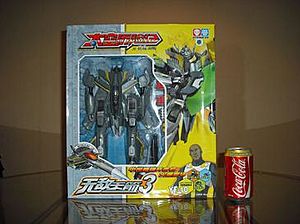 The series' episodes serve as commercials to promote a line of transformable toys manufactured for the Chinese market by Xing Yuan under the HyperWiz label. The Astro Plan line consists of all six Type Yi fighters available in four different sizes from 2-inch Micro to 12-inch King Size. A distinguishing feature of the toys is the Macross UN Spacy kite insignia imprinted on their back panels.

Transformable model kits of the fighter planes have also been released by HyperWiz as well.

Knockoffs of the toys exist in Mainland China and parts of Asia. In addition, bootlegs of a VF-1J Valkyrie toy from the Macross series, as well as the jets from the Transformers: Machine Wars series, are also widely sold as Astro Plan toys. HyperWiz has addressed the counterfeiting issue by posting a notice telling consumers how to differentiate the authentic toys from bootlegs.

All content from Kiddle encyclopedia articles (including the article images and facts) can be freely used under Attribution-ShareAlike license, unless stated otherwise. Cite this article:
Astro Plan Facts for Kids. Kiddle Encyclopedia.